Bleach Everything :" So We Gnaw" 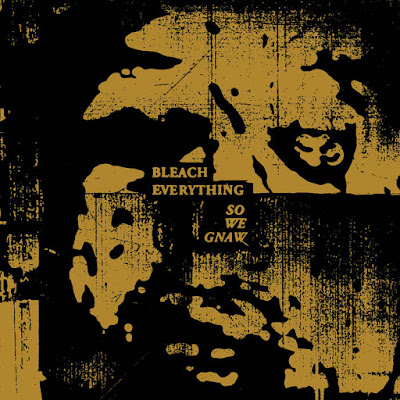 It is clear that despite the fuzzy blown out tone of this recording and the primitive hard core they rumble out from it that these guys know what they are doing. They should since they are comprised of guys from the likes of Darkest Hour, Mammoth Grinder and Iron Reagan. The sound of Iron Reagan being the more prominent  if you compared the influences of the their collective resumes.One you get about 4 songs in the punk side begins to make everything sound the same. Their is a more metallic d-beat sound until the more dumbed down leanings of punk take hold in "Soft Bigotry". They are more impressive earlier in the album. The first song almost has a sludge feel to it. There are some catchy riffs still laced with enough anger to keep them legit.

The harshly yelled vocals keep the lyrics from really being in your face, but the song titles are enough to tell you they are political. I am glad I can't make them out. I tend to stray away from wanting politics mixed with my music even when it comes to punk where that is more of a thing. I remember when Trump first got elected , people consoled themselves with the fact that perhaps they might get some good punk out of it. There did not seem to be an increase until 3 years later. Since these same people who bitch on the internet about the world they only see from the filter of their Facebook feed, they are unlikely to actually vote. Even if the system was not already rigged  and it would do any good so for the next five years we are going to see even more widespread influx of punk.

You are asking the computer screen, so why are you talking politics now? There is not much mroe to say about what these guys are doing because if you heard one angry punk song you have heard them all. I do like the last song "Dumb and Dug In" because it offers more in the way of dynamics and the riffs have more of an edge to the,. We have been getting all in your face aggression for the duration so needed some sonic variations. I will give this album a 7.5, these guys are good at what they do . I wish what they do was more like the first and the last song. Still it is well done , since the genre itself does not lend it self to a ton of new thoughts.