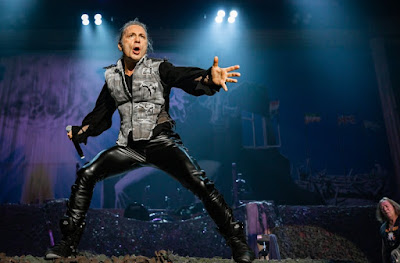 Let me preface this review, by saying this concert was less about me seeing Maiden and more about the fact it was my 9 year old daughter's first concert.We heard the openers from the parking lot and line for the bathroom. They sounded like the air freshener of the toilet smelled The set list was known so there were no surprises except for the elaborate production value of the show. It was pretty much a greatest hits set. Even Bruce admitted they have no new album, meaning at least they were not going to play new stuff/ They opened with "Aces High" . It was apparent Bruce was not warmed up yet and he was still trying to get back into the groove of preforming as the phrashing was really off on the verses , it sounded like he was mumbling. If you are new to the blog then you should know since Maiden is one of my favorite bands and Burce is one of my favorite singers, I don't give them a fan boy pass on things , but hold them to a higher standard and listen to it with closer ears. Speaking of closer ears. Mine were not ringing  afterwards. Since it was in a shed, the sound carried instead of smacking you. "Where Eagles Dare" found the dust continued to be knocked off. The band was certainly on point. I made it a point to listen to the guitar solos in order to hear which of the three are my favorite and the winner was Adrian Smith.

Bruce was back in it by the time they got to "Back In the Village" which is one of my favorites from "Powerslave". My daughter was engrossed in the experience up until revelations. Which for a 9 year old in 2019 who spends a great deal of time with the over stimuli of video games and Youtube, is pretty decent, and better than some of the adults. The twist to the set was the worked in a couple Blaze Bailey songs. I has only partial familarity with them as I have only listened to those albums a couple of times when they came out and like to forget those years. I think they should go back and record them with Bruce singing , but that is just me. I think Bruce at 60 years old and post -throat cancer is still a better singer than Blaze in his prime. "Revelations" was one of the more impressive songs in the set. Bruce sounded great on it so that helped. His voice sounded best on the melodic part two and a half minutes in.

The stage looked really cool for "Number of the Beast" which London said was her favorite song. Though she just likes saying 666. They were not as good as when I saw them in a theater for the "Seventh Son " tour.  But they were better than when I saw  them in 2012. The production value was bigger and the set list was better. I had already seen them play the "7th Son" songs before so that was rehashing. I am glad I got to hear things like "Wicker Man" and "Revelations" which I had not heard them play live before. If you get a chance to see them when they roll through your town it is highly recommended , even if you are only a marginal fan, and truth  be it seemed the audience was half marginal fans who wanted to scratch Iron Maiden off their bucket list. I think no matter what shade of metal you are into if you are not wowed into the up most respect for these guys when you seen them live, then you really don't know shit about shit and I could careless what you think of music.