She Past Away : "Disko Anksiyete" 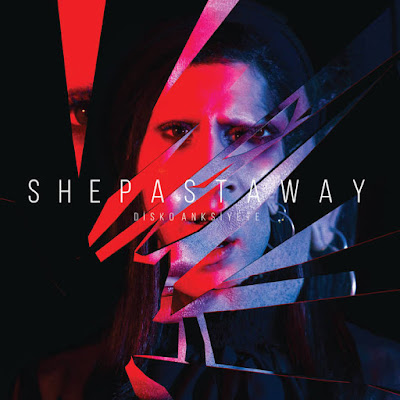 Right from the first song I can tell their 3rd album is more polished and has more of a new wave feel than dark wave. It is more overtly 80s retro like something from a Knight Rider episode than brooding from the cat cave. The vocals sit back in the mix. They are not a murky. Nor are they draped as thickly in reverb. In fact I would go as far to say this is almost too upbeat. It is certainly more in the zip code of Lust For Youth, though not as poppy as their most recent album.  The second song is darker and the vocals take on a more familiar goth like tone. This vibe is repeated on the third song, but more juxtaposed against the peppy dance beat. The guitar kinda blends into the mix so less post-punk tension and more new wave.

"La Maldad" is more driven by the bass line, though the guitar oddly sounds like it could be from a country song. Granted Sisters of Mercy set the standard by staying in the low bass croak. Many bands have followed in their foot steps. Andrew Eldritch's voice is more resonate. He can actually sing. Many of his imitators do not have the same talents as he and the result is what we are getting here.
They continue with the more upbeat mood on "Renksiz" . The vocals stay glum but every thing else skips ahead into the 80s. The songs are compactly written. Some carry more of a down trodden thump than others as the album progresses. I think how the guitars factor into the mix also is telling of how they retain their authentic sound. Eventually thanks to the vocals the songs begin to sound the same. Though this was avoided until the last few songs on this album. Some times the synths and guitars work past the vocals and make the song more unique, but this is harder than it should be for them. The atmosphere being less thick there is more of an ear put toward listening to the actual song.

Three albums in so the formula is settling into place and getting smoothed out. This is a mature step forward for these guys . With that said I doubt I will listen to this album again, as I have other stuff that dos the same thing. I will give this an 8 because it does sound good and if you are into these guys then you will enjoy this so it was a success on their part.