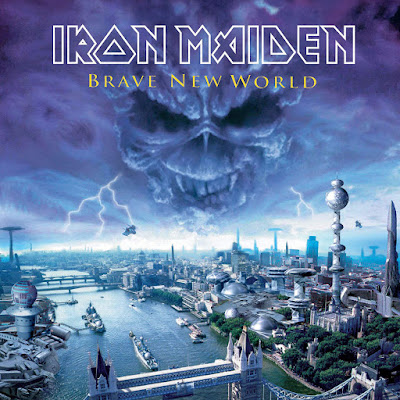 Normally when I go back and review older albums to see how they stand up they fall under the "Looking Back In Anger " column, but since I am readying myself for this weekend's Iron Maiden concert I decided to review a perhaps more underrated album each day until the show. After a 7 year hiatus Bruce returned for their 12th album. It finds them with a gritter sound that is true to who they are while not relying on the sounds from the 80s. I think what works on this album are the same things that have made the band relevant still today.  The proggy side of the band is indulged more on the title track. It's great guitar work so I won't complain. It finds its gallop in time and represents Maiden well.  I like the bass line that opens up "Blood Brothers". The song starts off more prog than metal. Bruce's voice sounds great.  "The Mercenary" is back to a more metallic fare, though it is more on the mid paced side.Sounds like it could have been a b-side from "Piece of Mind".

The angular nature of the prog they go into on "Dream of Mirrors" feels a little awkward until they smooth things down by dropping down to more of a subdued pulse. It builds up into the gallop you want from them. Dickinson's voice does has a little wear and tear on it in the more aggressive accents to " the Fallen Angel". The song has enough metallic drive to carry you past this fact."The Nomad" is the first song that is without a doubt metal by anyone's standards. "Out of the Silent Planet" has a more melodic quality. I am also noticing more strummed guitar parts on this album.It works and it is what I want from Maiden though I am not sure if it is as compelling as the rest of the album.

The closing anthem "Thin Line Between Love & Hate" mixes a darker moody element into the more straight forward palm muted tension they commonly employ. When the song breaks down into the melodic section it gets really interesting.This one easily gets a 10, making it a little better than "Fear of the Dark" . I am glad I gave this one another listen as I had not paid much attention to it since back when it came out.