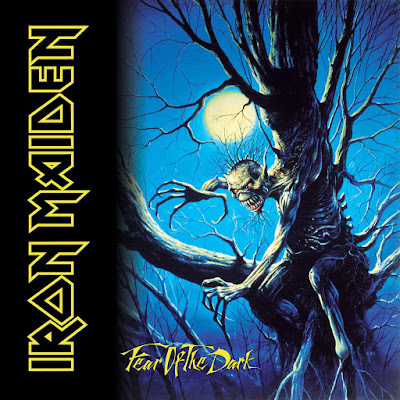 Normally when I go back and review older albums to see how they stand up they fall under the "Looking Back In Anger " column, but since I am readying myself for this weekend's Iron Maiden concert I decided to review a perhaps more underrated album each day until the show.This album took a while to grow on me. I am unsure, why I did not like this album when it came out in 1992. I think when it came to heavy music at that time I was more into Morbid Angel and Deicide. It was certainly on the cusp of when music was changing.  A few years back I went back to listen to this album and had more of an appreciation for it.   I like the lyrics to "Here to Eternity" , though not a fan of the gang vocals on the chorus. The make the song too happy. There is a bluesier guitar tone in places than we have heard on previous albums. "Afraid to Shoot St ranges " is a great song as it has a dynamic range and displays a moodier vocal from Dickinson. The production on this album takes some of the teeth from the guitar so I can understand why at the time of it's release it was less impressive as a metal album in terms of heaviness when pitted against Morbid Angel or Pantera.

The more rock n roll tone of the guitar takes away some of the heft from the guitar on "Fear is the Key". The song itself reminds me a little of Dio. The mood is a little darker thanks to the riff going into the chorus than the previous songs, so that certainly works for me. "Childhood's End' opened the door for the style of prog rock that the band would incorporate more into future albums. It doesn't grab me as much as the previous songs. The power ballad "Wasting Love" has more power than ballad and up til this point ballads were rare for the band so I like that is shows a different side of Bruce's voice.The do get marginally heavier on "Fugitive" which carries the spirit of a song like "the Prisoner" , so more in lie with classic Maiden.  They carry this torch into "Chains of Misery" though tempered with rock n roll. Once again the gang vocals on the chorus are iffy for me.The riff on the verse reminds me of the Scorpions.

Though the riff to "the Apparition" doesn't really sound like something they would have down up to this point, as a song it still works for me. It does highlight how weird the mix on this album is. There is a great groove before the guitar solo though. "Judas My Guide" is a mid paced rock with guitar guitar work , that upholds the classic Maiden standard. "Weekend Warrior" has a riff that has an AC/DC feel. The song fortunately carries a greater range of dynamics than AC/DC. The lyrics are dumb and the phrasing feel awkward. The title track stands shoulder to shoulder with the best of their classic songs. It what you want from these guys. I will round this up to a 10 as the one song that doesn't work for me, might be a fast forward classic, but I will sometime give a listen if it comes on shuffle. I think the great songs like the title track compensate for it.   .