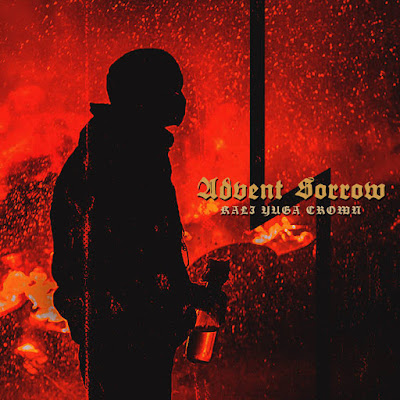 I know I do not cover black metal as much as I used to. It is not because I like it any less. It is because it has all started to sound the same. I do hunt for something that is different. I want something that is darker and more melancholy. This band from Perth hits both of those marks and the album does not sound like it was recorded in a closet. It is not too blast beat heavy. The vocals are varied snarls, sort like what Shining used to do many moons ago. They are no content with doing just one thing. There is more of a black n roll feel to the second song. But it is more Lifelover than Darkthrone. The buzz of "Spearhead"s' guitar kinda blends in with everything. They are more deliberate than most black metal bands but this doesn't grab me as much as the first two songs despite the sung vocals that eventually come in.

Even when I begin to not pays as close of attention as I did at first I am still present enough to hear some interesting layers of guitar are being used. The vocals are just crazy howls at this point. The sung vocals tend to come in toward the end of the songs. So they are beginning to settle into a formula. "Pestilence Shall Come"  reminds me more of Urfaust. I check back in more attentively due to the more menacing darkness summoned on "Caesar" . It has a more sinister pulse. "Wells of Poison Water " has a much needed dynamic shift as it opens with clean guitar. The more metallic aspect of it blends in with what they have been doing the bulk of the album. The guitar gain a great deal of heft when in a powerful chug. " Majesty Enthroned" is more feral. The vocals have pretty much lashed out the entire album. Here the rest of the band joins in. The problem being it  causes them to sound like everyone else. It does slow down midway into the song, but it's brief and too little too late.

They return to their sweet spot on "With Conviction" finds them closer to their sweet spot , but not as much as the last song. The harsh vocals eventually become an annoyance as they use such similar patterns. The lower vocals are much more welcome when they arrive here. The guitars lock into a nice drone here.I will round this album to an 8. It gets off to a great start and gets bogged down in adhering to some of the tired black metal tropes. However this does work well when they are more expeimental and flirt with a more depressive sound.