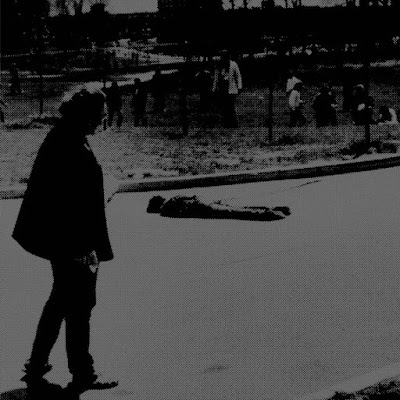 This German band has a lot going on. In the first song there is more of a moody feel and it is more post-punk than punk, though the vocals are yelled desperation and not anger. The male vocals are angrier. They never release the hard core and I think that makes the tension more powerful. There song is less unique on the second song when they are more punk. The guitar still maintains a cleaner sound and it's left of center from what you expect from your every day punk. The bass player and the guitar tone are the two strong points of their sound. The vocals are the weak spot as they are just yelled with varied levels on intensity. They begin to let the hard core slip out by the 3rd song. They sing in their native tongue . While it works for me, Americans can be weird about it like they are weird about sub titles , but refuse to speak anything but English.

Despite having some cool sounds to work with when things just stay punk it can sound like any other punk band that came out after 2010.  The moody instrumental works well, but I wish it was an actual song with vocals. Though the vocals on the song that follows this makes me reconsider that statement. When they slow down and think about what they are doing and get depressed over it the results are much better. I will say German is a weird language for punk. Dutch and French might work better, Just from the perspective of phrashing.

They hang onto the punk and take it a step further into hard core on the last song, but the bass line helps keep me in the game and the more metallic slant of the guitar that comes in. They have a good sound and take a pretty decent stab at song writing even though the vocals limit the range of dynamics they can achieve. I will give this an 8.5. If you like dark punk give this a try.