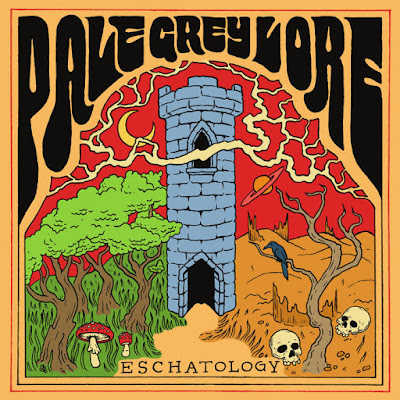 These guys play a heavy handed version of drug laced Camaro rock. The vocals offer more hopefully floating sense of melody.The tight syncopated feel of what they do has as much as in common with Helmet as they do Kyuss. There is more to their songs than just bong worship. There is a more straight forward feel to the second song.  "Before the Fall" finds more melodic turn in guitar playing creating the atmosphere to open their up more. "Regicide" find the tempo shift into more of a boogie. It did not grab me at first and felt like an extension of the previous song, when I go back and listen to it I can hear the difference in the vocal pattern.  There is an even more dynamic shift on "Waiting For the Dawn" which carries a more relaxed 60's like strum. The vocals are simple , but sung well for what they are doing.

"thr Rift' finds them locked back in more of a boogie. They have a heavier and denser sound on "Void Cursed". It hit's hard and is heavy, though carrying the weight of a bad like Blue Cheer with a low end fuzz, not sure around here we would define this as metal, perhaps proto metal with less retro aspirations might be a better description.  "Silent Command" does have a kind of creepy hippie 60 s vibe. This is a lot like Uncle Acid and the Deadbeats, in terms of mood and sonic space it takes up. It is darker , but not the most compelling song on the album. The more uptempo "Undermined" doesn't stick with me as much. There are some guitar harmonies that are interesting, but over all the song doesn't not grip me as strongly as those on the front end of the album.

The title track takes the album out on a higher note, with dark angular groove and a great deal of atmosphere haunting the song. The vocal melody is more of an atmospheric element as it serves as more of a layer to the sound rather than playing a driving part of the song itself.  I will give this album an 8.5. It might not maintain the same momentum it starts off with, but never really drops the ball, some of it is just more straight forward than what I am normally into. This album comes out Sept 6, if you are into psyche- stoner- rock it is worth a listen for sure.