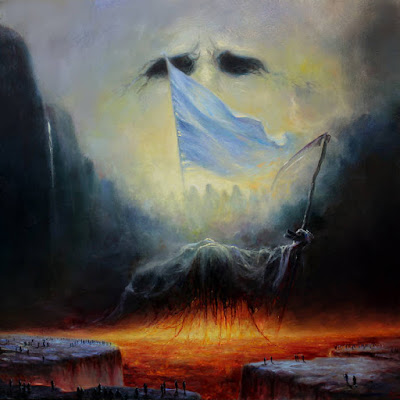 The second full length from a band with black metal aspirations out of Minnesota. And area cold enough to capture the mood the music was meant for. This album has a great deal of hype behind it as their female singer gave the more politically correct hipsters something to get behind, despite black metal now being not as favored among hipsters , but more prominent in metal as a whole,. Is the hype warranted for surely this is going to be on a great deal of end of the year best of lists since it is an album that is supposed to be their if you are a thinking mans millennial metal connoisseur. This band falls into the same trap many other bands have of late. The album sounds good. All the sound are dialed in from a production stand point even to the point that on sound alone they certainly sound legit. The problem however being less emphasis on song writing despite the bulk of the albums consists of three songs all over the ten minute mark.

The second song might be darker than the first , but if I had not glanced up to look at the screen I would have assumed it was all the same song. So the dynamic range of what they do is not great. Lots of blast beat. The play chords that should carry and icy sound, but I am not feeling any darkness coming from the intent within these songs. Instead I hear the right notes being played with not a great deal of conviction of hatred behind them,Where they have improved on some level is the prominence of keyboards that help add shadows to the mood. "the Serpent Sting, the Smell of Goat' is a great song title. Letting up on the blasty beast and allowing the song to breath is their best idea yet.  It allows you to hear that the drummer is great. The bassist is also not slouch. The guitars play it rather safe though. There is a little more variance of emotion in her snarl here, but the vocal are the weak link of the album as she is a one trick pony.  This makes all the songs sound even more similar. Five minutes into this one and I can not imagine any justification for dragging it on another 11 minutes.Five minutes later things break up for a bit and it sounds like they are jamming over a more epic atmospheric section with more interesting guitar riffs.

If you are fine with settling with a 2019 take on the second wave of black metal that sounds good , but not much in the way of song writing then you might find this album growing on you. If you aske more from black metal and need to feel it invoke hatred and darkness these guys might sound like their name and prove to be poseurs.  I will give this album a 7.5. It doesn't suck and if you are already a fan then you will like this. If you are tired of the same old same old, then you might not be as impressed.