Maiden Voyage : Iron Maiden's "No Prayer For the Dying" 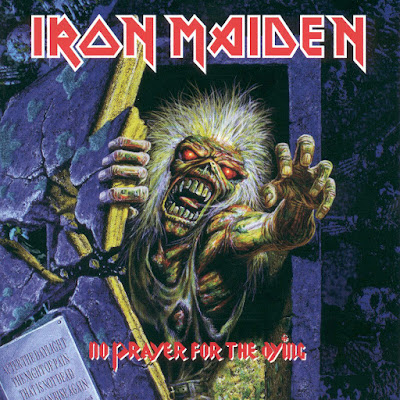 The 1990 follow to Seventh son, finds the band firmly still locked into their classic sound. The first two songs it's business as usual. Things open up and get more melodic in a manner that strays from their tired and true sound on the title track. Most of the staples are their like the guitar harmonies , you can heart this is where they started playing around more with them. The choruses are strong and anthemic as the band swings for the fences.They had perhaps more drive and aggression than they did on Seventh Son. More melodic elements creep in on "Fates Warning" along with stellar guitar playing.When it kicks in the power the gallop off with is consistent with what they have been doing up until this point. There is a more brooding tension to "Assassin".

"Run Silent Run Deep" opens up with a darker moodier tone before they eventually build up into the chugged gallop you want from them. Bruce's voice sound good. Though he is not going above and beyond the call of duty.  There is part of this song that makes me think it could have been on "Powerslave". The come the two most rock n roll songs on the album. The first being "Hooks in You". A more sexual lyrical tone pervades this song. The chorus is extra hooky, no pun intended. "Bring Your Daughter to the Slaughter". might be my favorite on this album. It is the most memorable.  "Mother Russia" is the more grandiose side of Maiden. Not really in the Mariner way, but more progressive and exotic in it's larger than life melodies.

It is pretty easy to give this album a 10. It has held up well over the years. I think it marks the end of an area. "Fear of the Dark" is good, but this one feels more tied to the continuity of the band in their glory days, where from a production stand point "Fear of the Dark" marks them turning a different corner.
Posted by Wilcifer at 7:20 AM