Wear Your Wounds : " Rust on the Gates of Heaven" 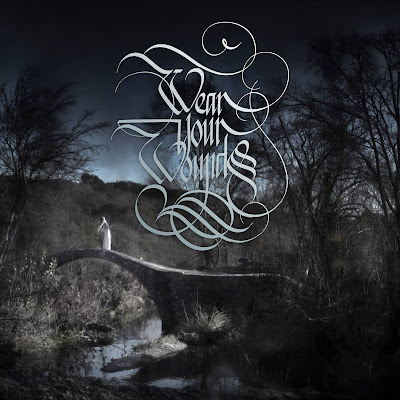 Jacob of Converge has established a more permanent line up that consists of members of The Red Chord, Cave-in,  Trap-Them and Hate Breed. But do not let that deceive you this has metallic elements in play but could only loosely be called a metal band. Ben Chisholm of Chelsea Wolfe fame, contributes as well. So does Gared  from PlanesMistakenforstars. His appearance I was most excited about though it is often relegated to the background since this is Jacobs show and it can be hard to tell their voice apart in places.  Jacob's singing voice has improved. Granted he has effects on it and is not projecting it. But he can hold a tune. Gared from Planes comes in behind him to bolster the melody. I like that this is darkly melodic. I comes with a  heavier build that is not metal, but works. It would most easily be filed under post-rock. "Paper Panther" is more straight forward sonic rock with the post rock atmosphere dialed down.

There is am ore spoken tone to his voice on "Tomorrow's Sorrows" which winds it's way around to a heavy chugged riff. "Brittle Pillar" also has some heft to it. I like the fact he is using restraint since if this was a Converge album he would have already been screaming. It turns into a sludgey rumble. "Truth Is a Lonely Word " manged to be darker un expected ways that are not tangible and best heard. I can say this song has some great guitar playing. "Rainbow Fades" has some sounds that are already familiar to this project like soft whispered vocals and an almost ballad like intro. The guitar playing gets more Pink Floyd like when we are in the meat of the song. "Love In Peril " mood-wise feels like it could have come from "Crack the Skye".  The weak spots in his voice come through on "Lurking Shadows" thought it still works because he has made no illusion as to begin a great singer and exploits this fact in Converge"s earlier work. There cool touches of country in the guitars to this song.

If Pink Floyd's "Obscured By Clouds " had been the soundtrack to a movie about a serial killer the sound might have been like "Shrinking Violet". The  album ends as it began with a instrumental piano centered piece.  I will give this one an 9.5 . The guitar playing on this album is fucking great. It's not Converge, but it doesn't need to be.