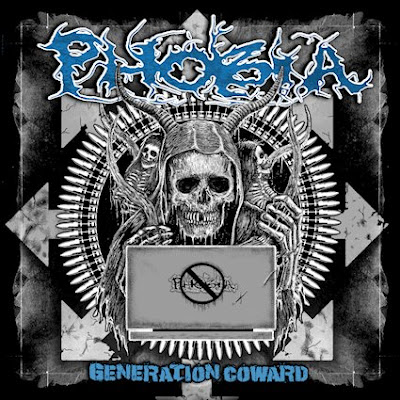 The California kings of Grind core are back with their 7th album. This time the theme seems to be the inter net culture of the Millennials. The album's title alone calls out a generation of  thin skinned man babies.  They are very metallic around the edges, though look into that blasting punk beat . Like most grind core bands the problem they face is not being able to allow their songs to go any where. You get quick bursts of what could have been a good song if it was over a minute.  "Internet Tough Guy" is certainly a timely topic. If you are pissed off reading the comments section you should play this song to get perspective.This song proves they do not have to stick to radio format, but a minute and forty five seconds is good. They do cram some cool stuff into a minute, but the rule around here is cool riffs alone do not a good song make.

The vocals are like old school death metal, giving these guys a great deal in common with Napalm Death. "PC Fascist Fuck Off" is to be louder and longer for the people in the back. Midway into the album it loses some of it's inspiration. Everything seems to sound the same. They regain my attention with "Miserable Awakening" . It has a grinding groove rather than just throwing everything at me a 100 mph. Then on "To Be Convinced" it is clear these guys are good at what they do , but it just sounds like any ultra aggressive punk influenced death metal. Which could be a description of most grind core.

I think it's the crusty hint to the post-apocalyptic power of "Condemned to Hell" that sets them apart. They need this darker touch more often. I do think they are darker than most grindcore, so that is why I like them more than your average hard core. You can also hear how they influenced bands like Nails.I was going to  give this album a 9, but I will round it up to a 9.5 ,as it grows on me the more I listen to it. I like their attitude here and punk is all about the attitude.  For a genre that is more about aggression and the onslaught rather than song writing these guys use their 30 years of experience to own their sound. They succeed at what the set out to do and taught the younger bands a lesson. This album comes out August 9th on Willowtip records.