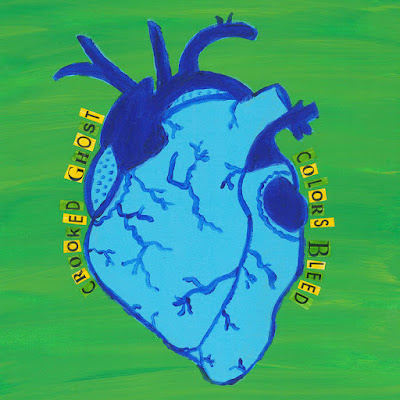 This gem was in my in-box. It once again shows why I do this. Sure I might be harsh with music I do not like . That is because it is taking valuable time from me in which I could be finding music like this. It has a murky jangle of guitars. Somewhat low fi mix, finds the overdubs going in every direction, but the sonic nature of this chaos some how works and his vocals top it all off well. There is a very organic, just plugged into the amp with little effects jangle to the title track, There is something sad and dark to the sound here even before the melancholy vocals come in. Of course I am going to like this guys voice as it's a trembling baritone that is emotive and flirts with his falsetto. The lead single "Sinew in Red" has a tension to it. Not the same kind of tension that most post-punk bands use, but like a brewing dark cloud of emotion.

It sounds like they just mic'ed the room the way feed back squeals out. This gives it a more punk feel even with the more crooned and tender moments of "Golden Blue". Some of these layers of guitar create a almost heavy canopy of sonic. In many ways they remind me of Merchandise.  These are not songs in the typical verse chorus sense . So do not wait for a hook as they make up for this in the weight of the vibe they create. It also creates an early emo feel, think Mineral here.

They they drop things down for the last song "Bright White Noise" / This one coasts more on a drone. It takes more time to grow on me than the first three. It is not a dark or tense, though they do slowly add more layers. He sings in a lighter and higher voice on this one. I have no problem rounding this one up to a 10. I can just leave it on and let i t play which is one of the best compliments I can give an album as I have so much music waiting for my attention. This will be in my top indie rock albums of the year . It comes out September 20th.