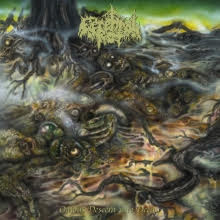 I told my self if this album doesn't come with song writing from the get go I am not going to waste my time with this and move on. To me glee they pcik up where Disma left of. It 's dark and gritty. Guttural vocals that are literally in the gutter. It owes a great deal to old school death metal without ripping off Morbid Angel. It has more in common with Obituary. Though rougher around the edges and the vocals are lower and not as tormented as Tardy. They make some really weird production choices with a guitar part on the second song. While it has not descended into sounding like every one else I am thinking that they are going to need to start adding some other elements in order to prevent. The guitar stay dirty and dense, one thing you can say about this album is there is nothing blackened to be found, it stays true to it's roots.

The bass is a little buried in the mix. The drums are not too booming and over produced. It sound like they are playing in a mildewed basement. There is some weird vocal layering on " Reeking Septic Mass". The lyrics are pretty much a mute point. The vocals are gurgled so low, they are impossible to make out. What I do not want them to do is how they start off the Eponymous song. They slow it down into heavily accented parts and double bass. By the time we are at "Putrefaction" it is evident this is not going to be one of the most original death metal albums. I would say even less original than Disma. They are very good at what they do. What they do is often attempted, these guys just pulled it off better.  "Sardonic Repentance" slows things down to an almost doom pace, and while this year has burned me out on death doom they touch upon this in a very convincing manner.

The charm of what they do begins wearing off with the hammering of "Repulsive Infestation of Cadaver". They do slow back down for the verse showing they care about the songs to some extent .  The song after this one has more groove which helps to win me over. Heavy alone will not sell me on a band. Said groove is not maintained through out and there are some breaks for brutal blasts if that is your thing. The murky mood suits my ears better. The last song doesn't pick up the tempo too much for too long there are few blasty parts, but they slow into a riffs that are fast enough just to get a circle pit started.I will give this an 8.5. It falls into many of the pitfalls death metal tends to though I am more likely to listen to this album again than most of the death metal that crosses my in-box. Comes out August 16th on 20 Buck Spin.