Psychedelic Witchcraft : " Sound of the Wind" 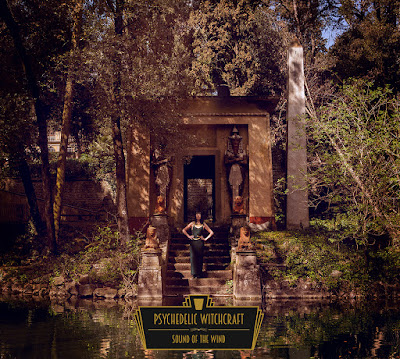 Female fronted "occult rock" or "vest metal" bands almost became a thing back in 2012. Here is a band from Italy we have covered before that still carries that torch. After an acoustic intro the band is back their brand of occult tinged stoner rock. The crunch of the guitar's organic warmth is what contributes most to the retro core of their sounds. Virgina Monti proves right from the opening track that she is not to be relegated to sultry and is a capable rock singer of her own merit, with vocal melodies that are more biting. The Sabbath influence lingers at some of the songs edges more vividly in some places than others. There is more groove to "Wild We Go". The songs are not long drawn out jams, though they do jam out at a little on the solo to "Wild We Go".  They back off and let "Sound of the Wind" simmer. It sounds like something from a California summer in the late 60s. This emerge from this decade with the Foghat like boogie of "Turn Me On".

There is more of a metal feel to "Rising On the Edge". The lyrically this album is a little more straight forward, but the increased sinew of the music makes up for this. This momentum is carried over into "the Warrens". It might be too much to call the song aggressive, but it falls somewhere on that side of the feeling wheel.  There is more overt sexuality to "Sin of Mine" that rides a serpentine groove with blues in it's veins. There is more of a Deep Purple feel to "Let Me Be Myself" . For an album that finds the band heading in a more bluesy direction this one pushes the point further. Piano leads "Horizons", that keeps them on the same blues oriented path they were on in the previous song , but with a bigger power chord emphasis, thus giving it more drive though I wasn't expecting it to be an instrumental.

I would say this album is less metal and more rock, but finds them maturing as song writers and hitting the mark in terms of working together as finely tuned rock machine. I'll round this one up to a 9 as I know after the initial listen I am going to need time to get used to the warmer more rock sound as this might not be as dark or as metallic, but is a sign of growth for the band.