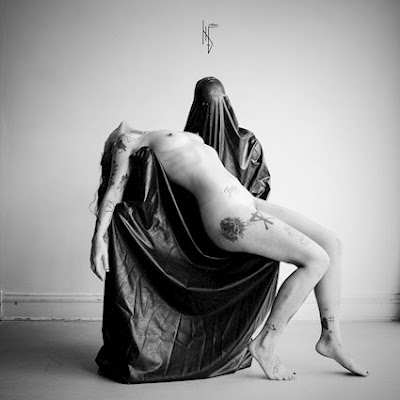 Diamanda Galas probably never crossed paths with Crash Worship. If she had the results might be similar to the first song on this Chicago duo's debut album. Percussion driven, the synths provide a droning layer for her to chant over. The percolating beat to "Bound-Severed" creates a more manic feel to the song's trippy throb. The vocals wind around this, though in terms of what she does with her voice doesn't differ greatly. There is more of an angular chaos to "Close Your Eyes". The synths take on a more kraut rock feel on "Wear My Skin". The pulse of the beat keeps it from sounding to 70s sci-fi sound track.

There are more layers of fuzzy swirl to the synths on "Come Undone". This does make for an interesting sonic texture."Wildfire" is a darker turn, but like most of the songs thus far takes on beat and pounds it for all it's worth leaving little in the range of dynamics.They drive some of these into the ground more than others. Singer Heather Gabel sounds like a gothed out Courtney Love when she injects more anger into the vocals of "Fucked". This emotion is contrasted by a more robotic backdrop behind her. It is the first song that sounds like industrial to me. Though there are many moments that might have common ground with Swans "Filth" album if you took out the guitar.

It ends with the sparse moan of "All Fours". The moan shifts into almost more of a grunt. This album might be the only song I heard guitar one. It's pretty single minded and comes across as more of an outro.  I'll give this album a 7 as it is dark with cool sounds and a sinister enough emotional intent behind it but these are not fully formed songs. They are performance pieces that  might be cool to see live, but as far as having them in the iPod for day to day listen it's not really something I would get a ton of mileage out of.