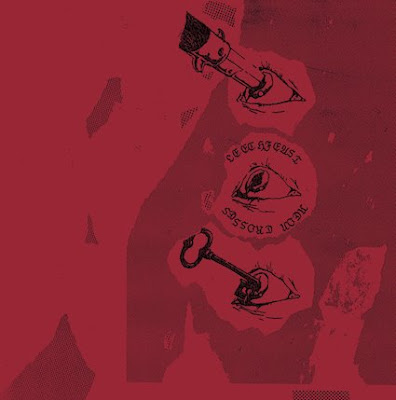 This is the sludge band from Slovenia's second album. We know these guys are heavy so rather than convincing us that I am more interested in them convincing me they can write a song. The can add eerie ambiance to the background of what they do. They can play at tempos dismal enough to ride the line between sludge and doom. There are some sung chants in the background , but they are not remaking the wheel here. They use  similar formula on the second song. There are some different accents though the riff is similar in it's dirge like drag.  The vocals are in a dry rasp, a little more demonic than say Eyehategod, which has more of a punk influence.

The snarl of "Tar" picks up where the previous song left off. The only way I can tell the songs apart is where the chanted vocals drift in. There are a few variation in the riff, but we are getting pretty mush the same thing. There is a more whispered vocal that crops up here , but that is the only major change. Some odd bits of atmosphere haunt things here and there. At some points it sounds a little like Atriarch in places, but Atriarch is more dynamic and brings more musical colors to the table. I understand that the speed they play at dictates the length of the songs to some extent, but if you are going to have a ten minute song then you need to take me on more of a journey and less droning. I little drone can go a long way . Really pound it out for a good minute and you have made your point and can build from there.

The sung vocals leading into "Razor Nest" give the song more of a doom feel. I think this is because the melodies have more sorrow in them than anger or anguish. Samples are well placed here and used for atmosphere earlier in the album as well. The harsher vocals do return midway into the song. These guys are good at capturing a mood and creating the sounds to they succeeded at making the album they set out to make. I think what they made can be a little one dimensional for my tastes, so I will give it a 7. If you don't need much from you sludge and prefer it at more of a doom speed then this album is worth your time.