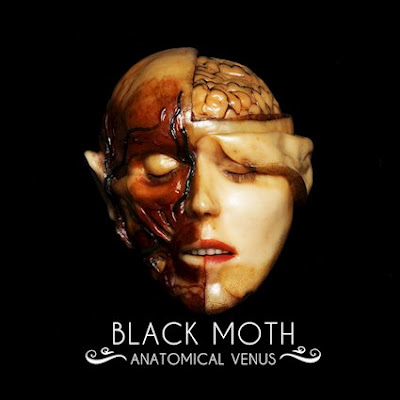 This female fronted stoner rock is darker than the bulk of the bands passing the bong under this banner.Hailing from Leeds the band's band first two releases were on a smaller label and had more of of garage rock feel to them. Their Candle Light Records release, finds the vocals stepping to the fore front. They are certainly the most unique component of the band . Lead singer Harriet Hyde carries a   a slightly sultry twinge to her  voice. On the harder edged "Sisters of Stone" this is coupled with a equally faint dose of aggression  .They build into more of a metallic mood by the end , though metal is more of  a dynamic quality than the defining term.  They also flirt with a grungy brand of doom at times. There is a Sabbath like groove to "Savage Grace". The vocals are doubled up on what might be the chorus , this is a studio trick they will hopefully employ more often.

They pick up the pace on "A Lover's Hate". The cymbal work on heading into the chorus reminds me of early Iron Maiden. This is really the only place where I hear much in the way of the NWOBHM in their sound. The doubled minor tone of the vocal harmony is the songs best moment. "Screen Queen" is more interesting both lyrically and the sinewy riff. It seems like the song might be about porn. There is a more sexual quality to it. The sexual quality is amplified and taken in a darker direction for "Tourmaline". This might be the album's strongest song. While there is a decent groove to "A Thousand Arrows" it feels like dialed in filler in comparison to the previous song. "Pig Man" is pretty odd, I had to check to see if it was a Melvins cover as that was my first thought. It doesn't really work in the context of the other songs. Her vocals on the verses sound like if Lords of Acid was rapping.

I'll give this album an 8. They have some good ideas. The album sounds great. It never feels heavy to me though "Tourmaline" is dark enough for me. Harriet has an interesting voice. I think this band has potential so I will continue to keep my ears out for them. If you are looking for some female fronted stoner rock that is not just trying to be a harder version of Jefferson Airplane then check this band out.
Posted by Wilcifer at 8:09 PM