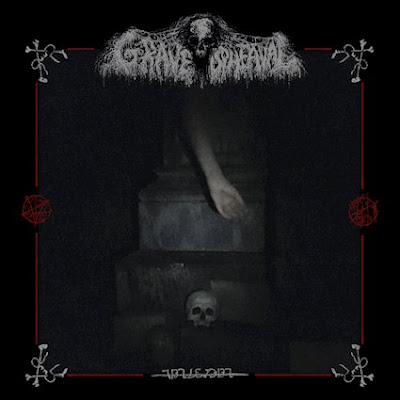 This might be the year of death doom, if my in-box is any indication of what is to come this year. I have several death doom albums that have been in a holding pattern during Black Metal History Month. This Australian band has a hint of black metal to the bursts of blast beats they go into and the vocals are not just low death grunts. Instead they are ghostly gasp and throaty whispers. This band was getting a bunch of hype on the inner webs. So clearly I had my interest peaked to see if it lives up to the hype.It is very dark and more atmospheric than I was expecting going into this. There is a very loose chaos to the actual song writing. This makes the challenge for the band are they able to hold my interest with hellish sounds long enough to compensate.

Not only is he album not titled , but the songs aren't either. The third song starts with blast beats up front. Some of the demonic vocals sound more hellish at certain points. When every thing comes together it is to form a doom lumber. There is a higher King Diamond like whine that comes out of the darkness. The song doesn't really go anywhere, except to offer lingering chugged break downs.It is not until the final minute of the fourth song that it really comes together. So writing actual songs rather than making cool sounds seems to be the challenge here. This is the band's second full length so maybe this is a sophomore slump. The fifth song comes together sooner , but the vocals drift around the guitars and it feels kind of ponderous three minutes in, making me wonder how I am going to sit through the next six minutes.

To the band's credit there is a great deal of originality in what they do. When they play a guitar solo it doesn't fit into the mold of your typical metal solo. They do conform sometimes when it comes to how they approach the blasts of death metal. The vocals which are more on the doom side if we are going to keep score help balance this out. The six song finds them locking more solidly into death metal. But rather than a band like Incantation where something hooks you into it, its like riding a roller coaster through a haunted house. Even though I began to let the 7th song fade into the background, it is one of the more solidly written songs. At this point the novelty of their sound wears thin and it brings me to the question all extreme metal bands must answer..."Ok you are heavy, but can you write an actual song?"

The last song proves my point though it feels more black metal to me in the way that it drones. These guys at their best touch on that place where what was dubbed "occult death metal" met at the cross roads of funeral doom. When they blast off the vocals could stand to conform slightly in order to bolster what is going on, but this is one of the album's better songs. In some ways I guess I need to retrain my brain what to expect when I listen to these guys. However writing songs might help their case as well. I'll give this album a 7, they get most of their points for the mood they create. This comes out April 15th on Nuclear War Now.