Winterfylleth : " The Hallowing Of Heirdom " 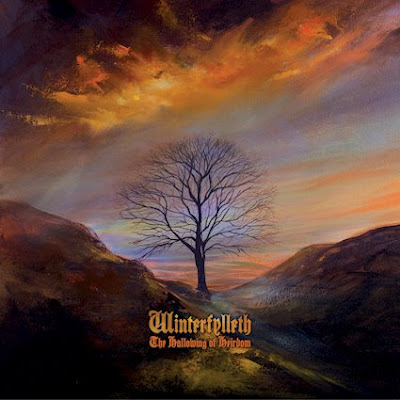 Well this is something that might not be totally out of left field for the band as they have always had folk elements to their sound, but for this album they have abandoned metal altogether to make a neo-folk album. The first song I thought was more Dead Can Dance for them, then I went and read the promo pack for this album to find it's all acoustic. I guess even them you could have double bass or growling without distortion, but I don't think that is their intention here. It might not be what I want from them but it is well done. The test will be is it all ballads. Just because you are playing acoustic it doesn't meant it all has to be ballads, but that is what we continue to get on the second song. This time is largely instrumental with the vocal parts mainly textures in the background. They find their way back to a strum for "Aecerbot".  I guess this still falls in the ballad pile. The strum of the guitars gives it a little more movement. The vocals kind of drag behind the guitar.

The bulk of the instrumentals on here just sound like they are playing around on the guitar and decided to record it. The vocals return for "Elder Mother". Another song that is more reflective in it's pacing. It gives a bardic recall about one of England's kings. Then "Embers" is something that feels more like an interlude than a song. But since they feel it is a song and the bulk of the album are pieces like this , then I will judge it accordingly when rating this album. A string section is introduced to the gloomy "A Latch to a Grave" this is one of the album's stronger moments. Much of that is owed to the strings and the layered vocals.

The last real song is also the title track that closes the album. The vocals are really well recorded and it's not a bad song, but it continues on the same gloomy ballad tangent they have been on for the bulk of the album. While I am fine with gloom, I would like some varied shades in terms of dynamics as this sits kind of flat with me. I'll round this one down to a 6 for this reason. If you are really into neo-folk, how much new stuff can be coming out ? so you will glad to get anything.

This album comes out  April 6th
Posted by Wilcifer at 6:16 AM