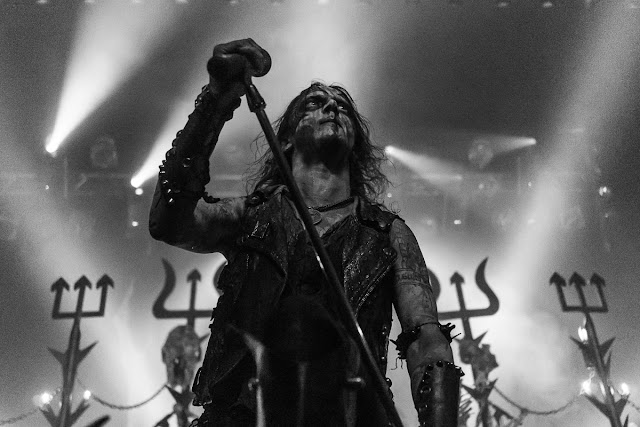 This was my first time in "Heaven" the larger room at Masquerade's new location in Underground Atlanta. Higher ceiling and wider space, we were still in the security line for Nexul's set. This was my first time catching Destroyer 666 and they invoked many of the thrash bands I saw back in the 80s.  Considering what now appears to be sensationalized accounts of their more barbaric behavior, I saw little in their demeanor that would support claims against them. They have the typical metal bravado, but were gracious and inclusive, making not scathing remarks of any kind. Their detractors who claim they are such mediocre musicians they have to resort to stunts, would have been eating their words if they saw how the band won over the crowd that was very supportive of  what seemed to be a healthy metal spirit which some claim to be toxic masculinity. Though most of the females in attendance had very positive reactions to their performance. None seemed to be offended by anything that went down on stage. The most demanding Warslut was might have been when he asked them to lower the lights for a more introspective part of the song where he knelt and looked to be praying to his guitar.  So fake news is now in every sector including metal press apparently as it was an excellent set with little in the way of controversy about it. In fact it was more melodic than what I have heard from their studio releases. The bass player handled all the more sung backing vocals. I am glad I caught them they firmly cemented me as a fan and I bought a shirt to support them. Watain is not a band that is going to sellout or blow up, instead each tour finds the band's fan base growing slowly and steadily.Atlanta has been behind the curve when it comes to black metal. The in-town metal scene in this city has it's roots more based in punk, so tends to favor thrash over black metal. However it was a solid showing with a crowd that got into the performance more fervently than previous times the band has passed through. My fourth time seeing the band the main difference seemed to be the energy they commanded the stage with.Since the Masquerade is a fairly new venue it seemed a few limitations might have been place on the band as the sweet stench of putrefaction did not ride the air. The score of tridents lining the stage were also not ablaze. The altar at the base of the drum riser was still there and various skulls adorned the stage. At one point Erik spat blood out into in the crowd from a skull chalice, but that was the extent of  ritualistic theatrics. The emphasis was putting the music in your face at high volume. 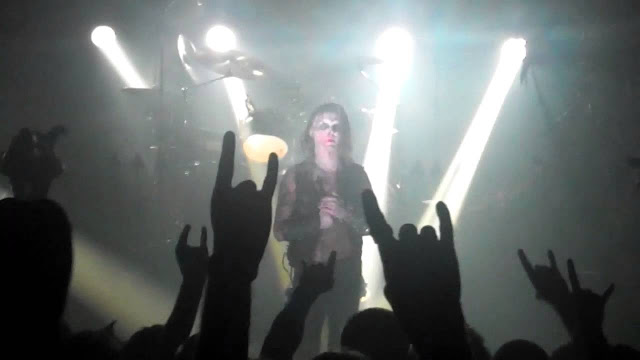 For me hearing "Total Funeral" and "Malfeitor" were my personal highlights, but I have a thing with "Lawless Darkness" being one of my all time favorite black metal albums so those songs will always have a special place for me live. I think the show for me proved how much of a seamless transition there is from  the three songs they played from their new album "Trident Wolfe Eclipse" and the rest of their work.  I think it's a testament to the body of work they have. With many black metal bands you are hit with a wall of sound from the blitz of blast beats, but Watain's mix found the guitar melodies cutting through.  Erik prowled the stage in his usual fashion, but it was the rest of the band that really stepped up their game in terms of stage presence. This made for a more powerful performance. One of the guitarists in my band was really impressed by them and he only had a sparse introduction to the band before the show and is normally into bands like Behemoth, so it shows their ability to win over metal fans who might not be devoted to "Transylvanian Hunger" . Black metal's impact on metal a whole is now a permanent fixture in the genre, and this show proved Watain's place at the upper tier black metal and silenced non believers.