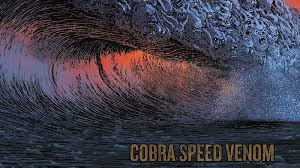 Well as far as Swedish death metal goes, this is not a total rip off of  Entombed or At the Gates so that is a surprise. Of the two bands it is in more of the At the Gates vein. Three members of the band have been around since it's 1998 inception. So for twenty years they have been about the head banging. The frequently meet at the intersection of death metal and thrash. You can hear the Slayer influence on "Iron Crown" .  At one point thrash was called speed metal and as metal heads would have there was debate in line at concerts (since the internet did not exist) as to the difference between the two. Speed metal was cleaner and thrash was rawer with more of a punk influence. This would be speed metal. It is very refined. Some of this is due to the fact these guys have been doing this for 20 years. The arrangements are very fine tuned. Live this guys would likely be tight as a damn bastard.

The solos have plenty of shredding for those of you into that kind of thing. There is more density in the driving riff to "We Avenge". It doesn't really grab me. The notes are all the right place, but I am not compelled to listen to this song more than once. The title track seems more of a show case for guitar wanking, with a few riffs that sound like warmed over System of a Down clustered around it. By "World War Machine" the album is beginning to get mired down into the kind of single minded aggression that hampers the bulk of death metal. "Necrohammer" is in more of an Entombed mindset, but it's an improvement. The chug is more powerful. More Slayer-isms can be heard hear as well.

There is a little more groove to "Rise in Blood" despite it's more hammering pace. The vocals drop into a lower death metal growl as opposed to the more mid ranged thrash rasp. "Where My Grave Shall Stand" is more melodic , but and instrumental meant to show case some guitar solos. It ends with more of the same that we have heard earlier in the album, just with a few more blue notes carrying over from the instrumental. Some of the bonus tracks might be better than the album tracks , but for the sake of this review I am just going to review the normal album tracks, which brings this album to a 6.5. Very meat and potatoes. If you want heavy, but no real sense of adventure and everything in your face all the time then this is for you.