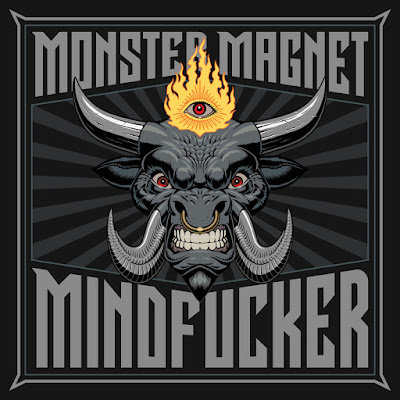 I used to love their first two albums. I did a shit ton of drugs to both. They eventually got a little to middle of the road rock for me and by today's definition might not be metal. So I am giving their new one a shot. First off lyrically they have gone down the toilet. There is an element to "Soul" that is a little too peppy for. This punk thing they are is not letting up and finds them having more in common with the MC5 than Black Sabbath. While I don't mind a little kicking out of the jams on occasion I am not sure this plays  to their strengths. The title track is the first song that really connects with me even though it might be a little more upbeat than I remember their old stuff being. "I'm God" also connects the dots to the band I used to listen to. It's not as upbeat and a little darker. These guys are such a guitar driven band that they need the level of playing on this song to compensate that Dave's voice is more attitude than pipes.

His voice takes a bluesier turn and almost sounds like Nick Cave on "Drowning". "Ejection" feels more like filler in it's proto-punk stomp. I don't think that this is what the band does best.  "Want Some" seems like a better use of their talents. It still has some of the raw power of early Stooges punk, but with the cerebral space rock that defines their brand of hard rock. Their is a hint of Blue Cheer and Cream to the more garage rock shuffle of " Brainwashed". I think what I want more of is the trippy haze that used to menace their songs and I am not sure where this punk thing is coming from. Gone is the hooky sense of adventure that used to define them . It's been replaced by a 60s vibe that can be felt on the boogie of "All Day Midnight" which is a step in a better direction for them. There is nothing that really comes close to being metal here except for the more powerful they take on the last song. The effects on his voice is a wise move. This what I want from the band so I am sure why there was not more of this on this album.

I'll round this down to an 8.5. This album is good and if you are a fan that has hung with the band in more recent years than this won't phase you as much as it does me since I want them to sound like they did 20 years ago. On most occasions they are good at what they are doing it's not what I want them to be doing so this album might be better than my sense of nostalgia allows it to be, but I think even with that in consideration, a 8.5 is a very fair score.