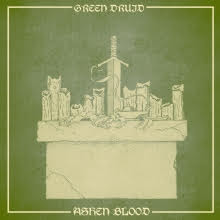 Green must be the color that needs to go to these numbers. When it breaks down into the dark smoky verse, things get better. The big loud riff though is recycled Sabbath worship. When I click on stoner doom, I am not sure what else I am supposed to expect. I guess following in Sabbath's foot steps doesn't get old. I have been listening to that sort of thing since the late 80s with Trouble and St. Vitus, who are two bands many of these bands are influenced by so not sure why I am surprised things are getting watered down. These guys are good at what they are doing, but what they are doing I have heard done before countless times. Now that is a sentence it seems I am writing more often these days, despite my best efforts to seek out ORIGINAL new music.

The second song gives me more of what I want as it leans in a darker psychedelic direction. At 13 minutes they have plenty of time to wander. It builds into harsher growled vocals and I think over all we are getting a better balance of sonic colors and dynamics here. It is also less Sabbath and I can hear traces of Pink Floyd, which is a welcomed addition to the mix. It is at this point in the album that I begin to speculate the correlation between the change of the marijuana laws in Colorado and the increase of metal coming from there. "Dead Tree" which seems to be the single they are pushing from this album is a slow droning affair with more in common with sludge than doom. It's ten and a half minutes that doesn't really go anywhere, and faded into the background as it failed to hold my attention. The song after it picks up where "Dead Tree" left off, to the point that this could be a continuation of the same song. Then vocals are better on this one though.

Until the gallop of "Rebirth" the songs were beginning to sound the same. They give "Ritual Sacrifice" the needed breathing room. This allows the vocals which for the bulk of the album are buried under a filter of effects the space needed to stand out. There is also a little more of a much needed dynamic ebb and flow to this song. I'll give this album a 7.5, but then again I wasn't stoned, perhaps if you were some of the color by numbers might not get to you. I think I also need a break from doom for the day.