Primordial : "Exile Amongst the Ruins" 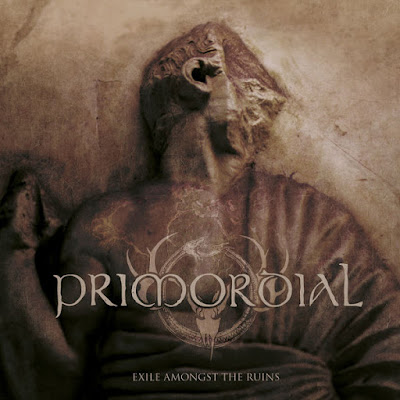 So if you read the review of the compilation ep I did a few weeks ago then you know, I have been looking forward to this one. These guys used to be more black metal and have grown out of it, which you can't be mad at considering how dark they are and how they get pagan metal right. Right from the first song there is a passing return to harsh vocals for a few phrases. "To Hell or the Hangman" was the on the EP and in my review of it I said I hoped they moved more in this direction, so I guess they beat me to the punch on that one. There is more of a doomy feel to "Where Lie the Gods". The build up into the more dramatically sweeping sonics is pretty typical of their sound, so is no longer really going out on a limb, but it sounds good so hard to complain. Clean guitar opens the title track.It's a balanced blend of powerhouse punches with melodic metal that still carries grit thanks to the wonderful vocal phrashing of Alan, who is not a Ronnie James Dio, but knows how to use what he has and continues to push himself.

Epic is a word that gets over used when it comes to metal. These guys are one of the few bands deserving of it. They tap into some very grandiose. Here it is done in the context of the song with very little effort. It's not like they are setting out to be epic as their mission statement when it comes to song writing that is just the organic result of their sound. "Upon Our Spiritual Death Bed" is a good example of how this occurs. The guitar melodies are done in a very natural manner of layering the swell of dynamics. Harsh snarls also resurface on this song which has pretty much every side of the band you might want. "Stolen Years" lingers like hesitant folk and takes the first half of the song really getting to the point. This is probably the albums weakest moment, which could be worse.

"Sunken Lungs" finds the drummer keeping things afloat. It is really business as usual for the rest of the band, which is fine as them just dialing it in exceeds the best efforts of your average band. I think they extend themselves further on "Last Call". This feels like a more personal effort on their part. There is a greater range of dynamics and gives us something we have not already heard on this album if at all from them previous to this.  I'll round this one up to a 9. So it's not the band's best album, but as said before their second best is better than most. If you are a fan of the band this is going to be what you are waiting for as it's more of the same.