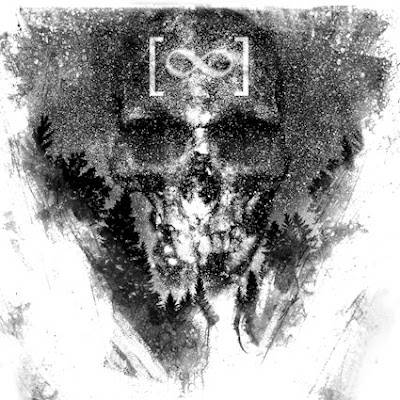 This Swiss project is getting a groundswell of buzz from their 8th album.It's black metal with an industrial twist. The opening song as a weird swirl of atmosphere to it. The vocals are typical of what you expect from black metal. A mid range throat scowl sometimes double with a more shouted vocal. The drums at the very least are working off triggers if not programmed all together. I think the projects strength is the darkness in the atmosphere they create. This is not done in the organic buzz of the tremolo picked guitar that black metal normally conjures. The second song sticks to a more full frontal assault and is not as effective. There is still the backing of synths giving it texture, but the song it self has less nuance. "um temps perit" benefits from slowing down into a more deliberate pound. This allows the chorus of angelic synths to make more sense. While it might not be as dark there is more emotional weight to this.

The ten minute song that follows begins with a blast. Half the time they concede to keeping the black metal status quo. It rides the wave of  rapid drummed fury, toward the end this is replaced by electronic drums , it a blurred blitz of what you expect from black metal. This project continues to prove they are way better when not tying themselves to blast beats. While dynamically this song drones in another direction, the throb of " I Tear Apart My Blackened Wings" is a vast improvement. They hit more musical moments with the song building into sung vocals layered around the growls.The song has a part 2. The second installment is more of your typical blast beaten metal. After a interlude it breaks don into indie rock like folk.This is unexpected.

Then its back to more blast beats. They are broken up by a thrashy riff here and there. Softened by synths , but for the most part it's another spin on the same old wheel. They close the album by proving yet again when they deviate from the norm the bring a realm of new sounds to black metal. The instrumental "Chuter" is more of an outro than a fully realized song, it still displays a range of dynamics that would have been better coupled against the blasting. I'll give this album a 7.5. It sometimes exceeds my expectations, I wished it would stray from the color by numbers black metal more.