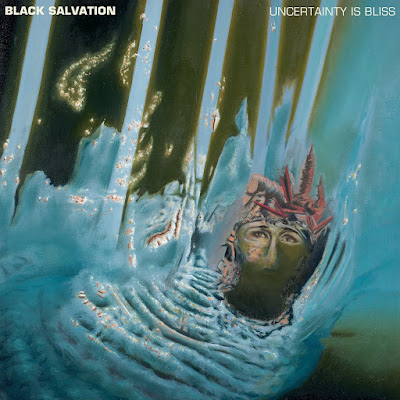 Former In Solitude and Grave Pleasures drummer Uno Bruniusson. But each member of this trio is highly talented. The guitarist Paul Schlesier handles the vocals. He gives the band a darker sound with a croon not unlike that employed on In Solitude's "Sister" album though more Jim Morrison than King Diamond. "Floating Torpid" finds the more Doors side of the band being delved into while incorporating a raw garage rock energy.   This is the band's second album , their first with Uno on the drums, but they are very sure of the sound they want to create. "Breathing Hands" is jammed out from the previous song, it sounds like logical progression and at first listen thought it was just one long song.

The is a slightly more relaxed strut to the strummed "Leair". Less Doors influenced and like a gloomy version of the Rolling Stones. The emotive warble of Paul's baritone croon continues to be engaging. In some of his more aggressive phrases he has more of an Iggy Pop feel. While there is a retro slant to their sound. It feels very natural and not like they are just looking for an excuse to wear bell bottoms and smoke pot. There is more of  punk freak out boogie to "A Direction if Futile". They have a really groovy guitar sound, that has reverb to it, but doesn't force the notes to hide behind it. Even at their most jammy, the guitar solos work with the songs. At over nine minutes this is the longest track. It indulges in some of the albums more psychedelic tendencies. I imagine this would go over well live. They display some great dynamics in the explosive manner the build pays off .

There is a rowdier jangle to "Grey River". The bass player really help the song drive. It is the most straight forward song on the album, even in its most spacey moments.  I can hear traces of 90s indie rock in how the chords are struck, which is not unlike bands like Drive Like Jehu. "Getting Slowly Lost" has an almost ballad like beginning. The vocals continue to fall somewhere between Jim Morrison and Ian Astbury. In fact when I went back to give this album another listen I picked up on some Cult-ish moments. But the build on this song is more like a "5 to 1 " sort of thing. That is not to say this guys are a Doors tribute band. They have their own sound, but there is no denying their influences.  I'' round this one up to a 10. This had been sitting in my in-box so I am glad the fact the In Solitude connection caught my eye. While these guys are not metal, fans of In Solitude will find enough common ground to enjoy this one. It comes out April 6th on Relapse.