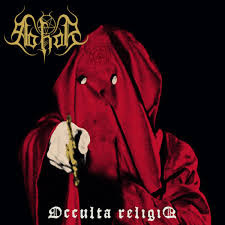 I really like the album "Ritualia Stramonium" this Italian band released in 2015. Keeping true to much of the darker Italian metal they have retained the horror elements of their sound, that put them alongside bands like Mortuary Drape. While this albums feels like it is giving in more to their death metal side, black metal is their in spirit as well as traces of doom can be heard in the riffs to "Fons Malorum". It's melodic and as catchy as they can be with the odd take on vocals that goes from a Gullom like gurgle to almost ritual exclamations. The keyboards are here once again to give it almost a Hammer Horror like take on Satanism. I had to go back and listen to "Engraved Formulas" as second time for it to sink in as I felt like I missed something the first time around. It mixes death metal with the gloom of doom in a way that takes you back to 80s Euro metal. The vocald don't contribute as much a feel like muttered growls rather than the more metal command that sort of thing normally invokes.

The first minute and a half of "Demon Forged From the Smoke" finds them on similar ground as previous song until the dramatic Phantom of the Opera like pipe organ comes in. From there it transitions into a more death metal like place. There are song head banging grooves that follow. They take an even more death metal turn with "Exemplum Satanicus". The lowers working better than the mumbled gurgles. Sure it achieves the demonic quality they are going for to have an array of growls, but the lower ones have more power. They do have some very forceful chugs that keep the song moving. The song even builds into a blast beat that is the most black metal moment so far. "Black Bat Recalls" starts off marginally more melodic and then builds up into something that is more in the same death metal realm that the bulk of this album is.

They end the album with the title track that has more of an aggressive stomp to it. The vocals remind me of when King Diamond was doing the demon voices for "Them".There is some impressive bass playing on this song. This album feels like it is heavier and more death metal than the previous album, which will appeal to some fans. I want things darker and creepier , I feel the songs are not as finely tuned as the previous album, though this is still pretty damn good I just don't think I 'll get a heavy rotation out of it. My 8 year old daughter had fun imitating the vocals on it though, I'll give it an 8.5 . Iron Bonehead is releasing this May 25th.