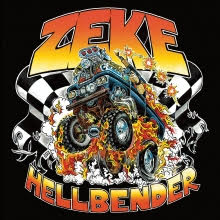 This is there first album in 14 years, but don't get excited yet. The first two songs struck me as pretty typical punk rock more emphasis on the rock. These guys are punk for the trucker hat crowd that normally listens to AC/DC and drinks PBR. "Working Man" rushes by in 1,2,3 go punk fashion with a few phrases here and there sung more than yelled. Motorhead is tossed around as an influence for these guys , but I hear more Fear. They are not bass driven enough to sound like Motorhead. "Hellbender" is only 48 seconds. At the speed they are playing they cram more song than you think into minute songs. This also causes many of the songs to sound the same as they become outbursts of riffs and leave the shouted vocals to really establish the song.  The only trace of Motorhead I hear is in the guitar solos. Solos alone to not define a band's sound, or at least they shouldn't.

By the time I am at "White Wolf" which sounds more like he is yelling were-wolf, I am unable to tell any of these songs apart. The vocals begin to take a more uniform spit fire delivery. "Devils Night' might be a good song title , but I can't tell it from the other rapidly yelling bursts of recycled riffs.If you are methed up in a black out drunk I am sure this would sound great speeding down the highway to Walmart. There is a weird sound on "Ride On " that made me think my phone was going off , but that was the only thing noteworthy about. I was so glad when I saw I only had two songs left which equated to three minutes more of this torture.

I think the 2.5 I am rounding this one down to since a 3 might be two generous might be the lowest score I have given an album, since lower than that I typically can't get past three songs. Good thing they were short as it made it a little less painful. I would tell you if you are into this sort of thing to round it up to a 3, but chances are you will die of alcohol poisoning before you get a chance to make it through this entire album that for some reason Relapse records is seeing fit to release, I guess they need a tax shelter. I was about to say to take into consideration that I am not the biggest fan of punk, but that's not right as I do like punk done right with some thought put into the three chords it uses.