We All Want Our Time In Hell : A Tribute to Samhain 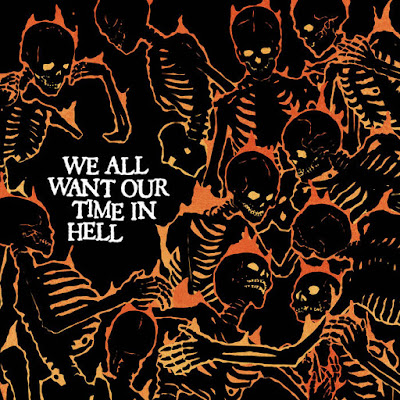 Of course I love Samhain, because it's like a darker, creepier version of the Misfits. I was the most skeptical about Joel Grind being on this album, but it is hard for him to fuck up "Night Chill" . Midnight then takes on "Mother Of Mercy" which has the line in it that inspired this album's title. The vocals prove to be the weak link here, but for what it is they do a pretty decent job and hit everything, but the vocals. You can tell what song it is, which is better than some black metal bands do when they cover a more rock oriented song. I think this darker direction would be a good place for them to move towards. Nil Eye is the one project on here that I was not familiar with going into this. They are more punk than Midnight. The vocals sound more Jello Biafra than Danzig. They still manage to capture the spirit of the song while being themselves.

Ringworm gives a touch of thrashing hardcore to "Black Dream".  I think the vocals on Midnight's song were better than the frantic barking that goes down here. Everything checks out alright, but that is such a crucial part of Samhain's sound.  Ghoul does a little better job. At least they are not just trying to growl or bark their way through this. The vocals are more spoken. They know what they have to work with and I am impressed by what the guitarist does here. Of course Acid Witch does "Halloween II " .  They totally nail the guitar parts in their own way. I was a little worried about the vocals , but while they are not doing a Danzig impersonation , they get the point across much like Ghoul, by doing a more spoken narrative.

Multicult's version of  "the  Howl" suffers from pissed poor production. The vocals might be decent or they might be terrible, it's hard to tell cus they are buried in the mix. Would Danzig's vocals ever be buried in the mix. I can tell they are the first band that is coming any where close to a Danzig impersonation. Their is a huskier and crustier stab at "the Shift" by Like Rats. There are briefly crooned vocals in the background, but at least they tried. Shed the Skin give's their brand of death a more skate punk feel on "Kiss of Steel". While the lead vocals are growled the back up vocals are sung. I have never given Immortal Bird enough of a listen. It sounds like I would imagine it might sound if Arctic Flowers covered the first half of the song and then let a grind core band take the rest. At almost four minutes this is an epic for a band used to throwing out songs in spastic bursts. It is the best I have heard from them.

Child Bite curated this album, so I am sure they got first dibs on "Unbridled". They did not knock it out of the park and it has a more Dead Kennedys feel. Brain Tentacles does a surprisingly faithful job of "Human Pony Girl". Ritual Howls " Arcangel" is kinda boring. Overall this is worthwhile if you are a fan as it is a more modern take on these songs . I'll give it an 8.5

Email ThisBlogThis!Share to TwitterShare to FacebookShare to Pinterest
Labels: Acid Witch, danzig, ghoul, goth, Like Rats, Midnight, Multicult, punk, Ringworm, Samhain, We All Want Our Time In Hell : A Tribute to Samhain