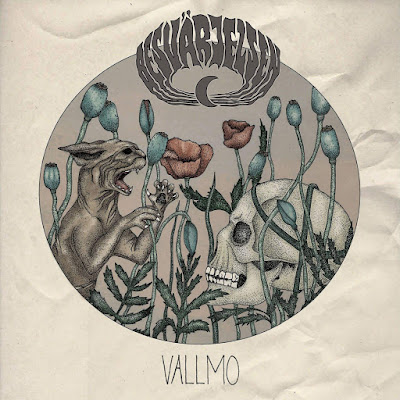 So went into this album with zero history with the band. "Return to No Return" might be the album's strongest song as it blends a surreal darkness with doom tinged rock riffs these guys so deftly deal in. It's the more surreal swirl to their sound that helps elevate them from the rest of the retro occult rock. While they might not be as keen of songwriters as Devils Blood was they are going into a more drugged out direction. With some interesting melodic breaks these guys are like subtle weed as in they creep up on you and the songs often seep into your brain. When the go into more of a metal rumble it doesn't feel as they are having the same creative impact. Though on "Oken" they prove themselves more than capable of hanging with metal bands of their ilk. They can approach a the stoner/ doom vibe from many different angles. On "Under en Svart Himmel" they take a more blues based approach to this. It's also on the dark side so I am obviously going to prefer that direction to the more traditional approach. It sounds like there is more interplay between the male and female vocals, though there is a androgynous quality to Lea Alazam's vocals that makes the lines blur when they are blended .

The band continues to show different sides of themselves as I am surprised by the taunt Tool like prog metal groove of "I Skuggan av Ditt Morker". Some of the more impressive guitar solos are on this track as well.  I like guitar solos when do right and I think these guys keep it in good taste and in the context of the song. "Farsilsarium" winds around another progressive groove. Another one that is not unlike Tool or Katatonia in the serpentine manner it can writhe around the drums. By the time it gets to the guitar solo its morphed into a more rock feel. The album closes with the ten minute "Alone" that begins to solidify the albums third act turn toward a more progressive direction as their singer displays a more soulful touch to her vocals. The solo section finds the song ebbing out into a more jammed out ambiance. I'll give this one a 9, the turn the album takes is interesting and it stays dark enough to keep my interest.