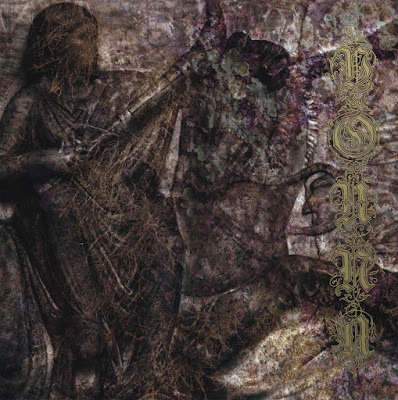 This project is driven solely by Yianna Bekris and is being released on Wolves in the Throne Room's label. My first impression based off the opening track is this is like a more depressed version of Myrkur. While there is a great deal of black metal tinged tremolo guitar we don't get to the more doom focused thick of the album until "Cattle". It's hinted at on the first song , but this is the first time she really commits. The melodies are languid with cleaner toned guitars laying against waves of mournful synths. It' very darkly romantic. It takes "Last Dream" almost half the song to sort through the ambiance and find it's way into the metallic guitars. The vocals are pretty sparse here. It builds into something more like Black gaze, which seems to be a theme with this album intersecting at where the more atmospheric forms of black metal and doom cross.

Things get more folky going into "Drowning City"  then they swell into folky doom, that gets dark and dense and really feels like something King Woman might do though without the blues under tones. "You Took Me" opens more dominated with synths and the drums very hesitant. I would argue that this is not funeral doom. It dark but not in an oppressive manner, and while beautiful at times it's not sonically intense enough to be funeral doom despite the lingering in the drums. "You Took Me" finds the main riff being droned against the repetitive melody of the vocals which begins to have more of a chant like quality despite carrying a hook.

While this album is doom , it carries a more subtle shade of gray. The vocals are not the strong point, but the song crafting is what keeps my interest in the way various layers crept over the shadowy dirges. I'll give this album an 8.5. As far as doom goes you gotta give them credit for not trying to go into a more vest metal direction and sticking to her vision.
Posted by Wilcifer at 6:17 PM