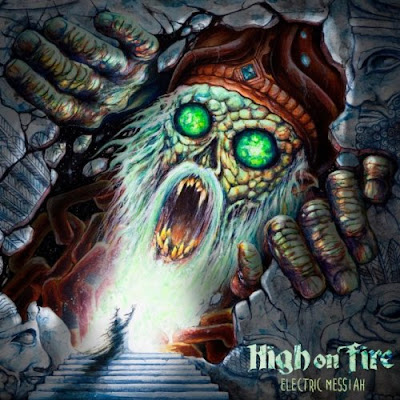 They are not fucking around here. They kick the door down and roaring full speed ahead like a more hardcore version of Motorhead. I prefer the less punk and more deliberate "Steps of Ziggurat". Even then there is a lot of heavy going on , but this is not their finest hour in terms of songwriting. This one feels like it doesn't develop much until the last minute. There are guitar solos flying everywhere and the riffs are pretty mean, but cool riffs alone doesn't make a good song. The title track finds them throwing themselves into the more rapid thrash attack of the bands Motorhead side. There is more substance to "Sanctioned Annihilation". It is slower than the previous song. The chords ring out to create a darker sound. Pike's vocals are yelled in the same gritty bellow. The tempo changes and at ten minutes the song has room to sprawl out and explore.

"The Pallid" mask is heavy and the guitars are dense, however it just sounds like drunk post apocalyptic pirates making noise. "God of the Godless" has more groove and feels like they have an intended destination in mind. Though they could drone on this for the entire five minutes. Instead they opt for the punk Motorhead mode. "Freebooter" might be the albums fastest song for the first minute and a half, but when it slows down for a few bars it feels more alive. This could be any thrash revival band that started off more punk than metal. This album is all about the guitar solos though.  "the Witch and the Christ" is a darker more intense take on their Motorhead side. It has more of a sludge attack that reminds me of Mastodon. Four minutes in it begins to bore me. It's not a bad song it's just too long to keep me interested.

They have a knack for always ending the album with the best song. "Drowning Dog" is no exception. It is more traditional metal, so think older Iron Maiden meets Motorhead. The vocals are somewhat more sung that barked. The whole flow of the song, while at a moderate thrash tempo doesn't sacrifice aggression for melody. So they can pull it off they are happier stomping through muddy water. I'll give this album a 7, if you read this review then you can put two and two together in regards to what I did not like about the album. It sounds good and is heavy, so that should satisfy the bulk of a fan based I am not numbered among.