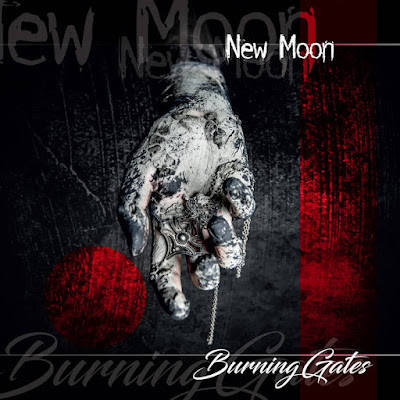 I am not sure if it was me not paying attention or the uniform nature of their sound blending the songs , but I was listening to the first song then when I looked up I was on there third song. They do blend their punk side well with their dark side, The song structure is dynamic and I get the feeling the guitarist grew up listening to metal as some of the riffs have a slight Randy Rhodes feel.Once I went back and gave another listen I could hear the second song has a similar drive to the first song.There is some sense of dynamics to both the title track and "Falling" that follows though they are beginning to rely on a predictable formula. The more metallic punches are interesting and at times it sounds like they might be going into a guitar solo but use restraint in order not to.

The most dominate influence I can hear is Fields of the Nephilim , though suppose Killing Joke might be argued into the equation as well. The vocals don't have as much grit. I am impressed that they cover David Bowie's "Time Will Crawl" from the "Never Let Me Down " album which is one of his most over looked and under rated. This first real shift in their sound comes on " Oceans of Time" which has a more melodic flow and they are not driving into it, but relaxing into the song. The drummer shows he might have listened to a few Rush albums the way he makes room for the song , but is not  content in letting it not be interesting. Really the vocals are what holds the song back, as he stays in a shouted ,spoken narrative rather than really singing. They do step outside of the normal post-punk confines as they allow the songs to go on winding journeys rather than drone on the tension.

The heavier guitar tones could use some work as it might have made "Fields of Rape" have more balls. The intersecting guitar parts work well in contrast, but I can hear where this might go if it had the density it asks for. There is a more straight forward pulse to the until midway into it when the beats to a more pounding tribal explosion and breaks down into a more typical post-rock shuffle. "Only the Memories" is a more post-punk version of Fields of Nephilim. The vocals have the grit that really helps with this comparison, along with the drive of the guitar. As far as the bass and drums go if those two elements were different then this could be more of a peace punk thing. "Unbridgeable" finds the bass taking on the more expected spotlight for the genre and the pace picks up more into a punk pace.

I am glad to hear things get darker going into the last song as they slow down and allow the guitars to create a lusher elegance in their melodies.The prove to be the most redundant element of their sound as a whole. I think over all bringing newer influences to the table than bulk of their peers helps sets them aside from the horde of Joy Division worshipers. For this I feel that while I might not repeat a ton of repeat listens out of this one since it flirts too closely to the original artists, I would be more likely to just listen to Fields of Nephilim when I am in the mood rather than this album, but younger listeners less jaded should check these guys out since they are great at what they do and deserve for me to round this up to a 9.