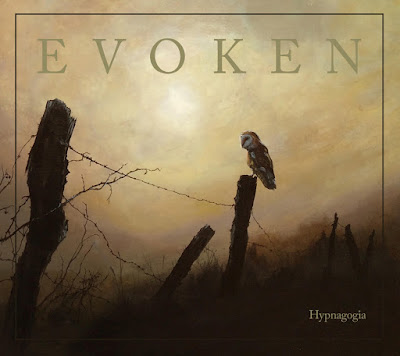 So these guys are not goth, but they are as dark as any goth band and color their music with similar sonic layers as bands like My Dying Bride and Type O Negative. Their new album which I  have been waiting six years proves to be just as dark.In fact the goth influence might crop up more here due to the prevalence of strings. This Jersey doom band might be America's best when it comes to not only funeral doom, but doom as a whole. This finds them picking up where they left off with "Atra Mors". Sonically it feels similar from a production stand point. Mood wise the atmosphere might be thicker. It's pretty dark, though perhaps not as filled with despair as the previous album. Lyrically it uses World War 1 as a metaphor to things they were going through at the time. This is done without the need to maintain some contrived narrative that concept albums tend to have. There is even a blackened section on the second song when the tempo speeds into blast beats. The bulk of the album stays in the romantic lush lingering of funeral doom with out the hesitation boring you. There is some great guitar melodies that lure you further in. The low growl of the vocals doesn't drop into the typical gurgle of funeral doom, but has more of a death metal rasp to them.

Right from the beginning they display and interesting use of synths. This continues on the more My Dying Bride elegance of "Schadenfreude" There are even strings to accentuate this. The vocals are low and spoken in a more gothic style than they are growled. Midway into the song it begins to bubble to a boil. Not busing into heaviness like you would expect instead hanging on the ambiance and decorating the subtle swell with guitar melodies. They go into a more traditional form of funeral doom on "To Feign Ebullience" . The vocals even come in at a little lower of a growl. Considering some of the album's twists and turns this song hangs on the funeral march pretty consistently with guitar embellishments keeping it from dragging. Strings chime in chime to add another color before the song's end.

The title track is an instrumental that hovers on the atmosphere even more fervently than the songs before it. Guitar melodies do compliment this. "Ceremony of Bleeding" is both one of the most dynamic song as it is one of the album's heaviest. The growls are more aggressive. The vocal layering is excellent. After an instrumental interlude comes the albums longest song for the closer "the Weald of Perished Men" and by longer it's only longer by 7 seconds. These guys are masterful songwriters who don't feel the need to drone on to make their point. The beginning is dreamy with low goth like vocals to bring a darker shade against the music. It builds as needed to give them a big metal ending draped in mournful strings. I'll round this one up to a 10 as it gets better with each listen.