Gothtober : Henry Derek Elis : "the Devil is my Friend" 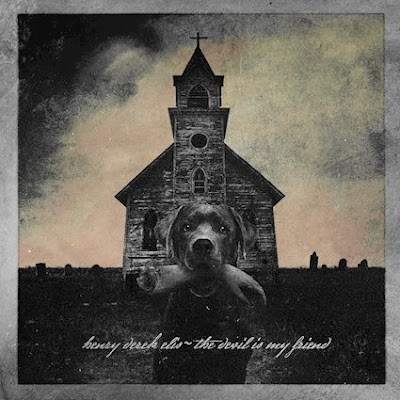 I am all for artistic changes Dax Riggs certainly made them. But he made them in a way that made sense. He went from Acid Bath to the still somewhat metal tinged Agents of Oblivion that was darker than Acid Bath in its way. Then Dead Boy and the Elephant Men with a garage rock sound that gave way to a smooth transition into his bluesy solo work. Elis' changes have had the kinda L.A band wagon jumping that resembles something closer to rapper Justin Warfeild who decided he liked Joy Division enough to fool people with She Wants Revenge. Elis went from metal to basically a H.I.M tribute act bacck to Myspace metal, not to country folk. What ? The problem is you can't fake the funk. While it is dark enough to satisfy me the over sound feels like they are trying to hard. What gives him away is how the vocal layers hide no the ghosts of the deep south but from Elis' Myspace metal past.

"What's Left of Us" is more convincing than the title track. Though the Tom Waits like rasp he takes on sounds more like acting than who is really is as a singer. 'Sing For the Dead Man" is pretty melodramatic. Things get marginally more intimate with "Weeping Willow" this Tom Waits wanna be rasp pretty much spoils the potential atmosphere that tries to develop here. Not that the song itself really goes any where dynamically. "Corpse Carver" brings the rock back into the picture. It sounds like one of his Myspace metal songs, with the guitar levels dialed back a little. He wants to go into the pseudo goth voice. He pretty much blows his own cover here. This gives it almost a cock rock feel when the guitar solos creep in at the edges of the song. He does shake the rock off with "If it's Not Too Late". It gets darker and I can hear him trying to switch over into more of a Mark Lanegan impersonation.  His mask falls off midway into the ten minute sprawl and he reverts back into cock rock.

"Only Bones" is and interlude revolving around  a wacky sample from an answering machine. This would have worked better as the beginning to a larger, perhaps "M.O.M". The cock rock tendencies go in more of an Alice in Chains direction. The song wanders off into a odd atmospheric section. "Graveyard Country Blues" has a slower darker simmer to it. He can't resist going back to his metal past. I'll give this album a 7.5, mainly due to the ind-entity crisis that makes some of this come across as a bit contrived and proves when you try to fake the funk your true colors show up at the end of the day. To the point that this almost feels like cultural appropriation.