Gothtober - Tears For the Dying :"Charon" 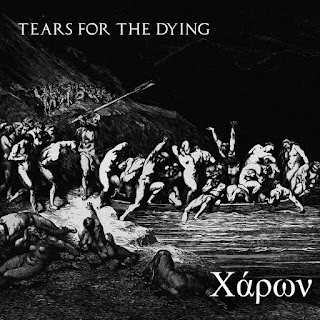 Here's a band from Athens , Ga that I have surprisingly never heard before, since I for better or for worse currently reside in Ga, Ok, Atlanta not Athens , but there is normally a great deal of cross over, since there is a finite number of places to play in the college town. They are dark and play off of most of the trappings from 80s goth you would expect. Her vocals are kind of detached. When the male vocals surface on the second song, that are a little more punk flavored. More Nick Cave than Peter Murphy. This song is also more uptempo than the opening track. The driving bass that is a key element to post punk is present. There is also a hard rock element in the guitars that does not go unnoticed giving them a little more balls than your average post-punk revival band. The continue with the more punk slant on "Bottle".

Then the more goth elegance I prefer returns for "Shadows". The thump and rock guitar is eventually where this song finds it self when they crawl out from under the more brooding section. I like the bass tone that rumbles out to begin "4:35" . The vocals have a more hushed tension over it. There is a much lusher atmosphere to "Guests". I really like the guitar tone here. The vocals kind of lay back into the sonics of the song. The synths are of higher in the mix than the guitar to create an mix of dark wave and shoe-gaze, so we will split the difference and call it Gaze-Wave.

The song ends with an angrier punk pound, that is still more new wave than peace punk. I'll give this album an 8. It has more elements that work for me than not and while the mix can be called into question at times, the sounds captured are wonderfully chilling. I am not the biggest fan of the moments where they try to be more punk than postal, I also don't like when my death rock goes in that direction which is why I always choose Christian Death over  45 Grave. If you are looking for something for a halloween soundtrack that still leans more on the goth side of the post-punk equation and is not some hipster Joy Division worshiping check these guys Athens out.