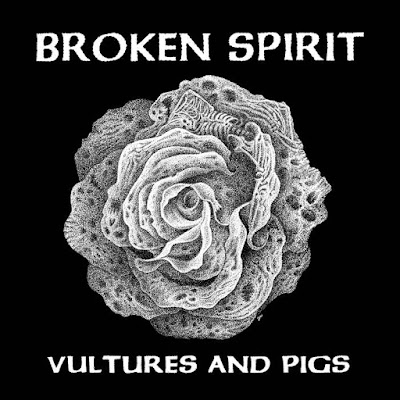 Most of the bands we now think of as goth were originally punk. Here is an album that reminds you of those roots. This band from Portland is  " Peace Punk" which touches into crust. The guitar tone is more like a new wave band and flirts with death rock. I think the main difference between what these guys are doing and death rock is this is more aggressive where death rock has more of a heroin sleaze to it. The vocals have a husky roar not until that of Killing Joke when Jaz Coleman gets more aggressive. "Distractions" finds them getting more bunk, though they don't just thrash out at you. The break it down into a palm muted chug. Their drummer really thunders and the drums dominate the mix. The vocals are less shouted and more sung on "Infiltrators". These guys are a few degrees more punk than Bellicose Minds.

Thus making them less spooky. But they are darker than your average punk band. The bass becomes more of a focal point on the title track. Eventually the sound they are very deft at cranking out begins to wear thinner as I can't help but feel I already heard them do this. There is a cool part where it breaks down and the vocals shift into more of a spoken section over the bass. But the rule here is cool riffs alone does not make a good song. The guitars have more melody on "Belly of the Beast" , but the vocals are what begins to really paint every song with the same brush.

With "Cold Life" I am hoping these guys switch it up a bit. It is slower and more deliberate in it's execution. The vocals only shift marginally with him hitting a few notes rather than shouting them all.  These guys are really good at what they do so I will give this album an 8. If you are a fan of dark punk then they are worth your time. If we fall more on the actual goth side they might not be as dark and melodic as you typically want things which is where I fall, but I do have a great appreciation for what they are doing. I am not going to cover any more of those dark punk bands that are more punk than not for Gothtober, but if this is the one I am going with , its a fair representation of the genre.