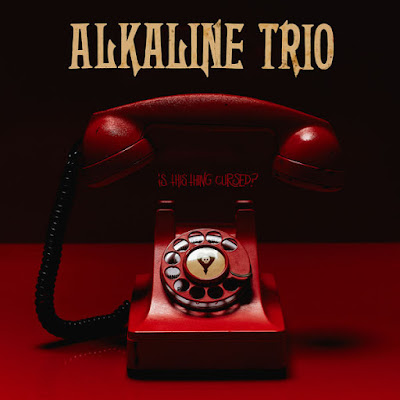 Almost goth by association. One of them is a card carrying member of the Church of Satan and they have never really made it a big deal, which I can respect. I have always liked this band , though they are kinda like Tiger Army in the sense some times even with the shadows around their songs they can still be too happy for me. These guys start of this album reminding me of a pop punk version of Murder By Death. The opener starts of mellower and more intimate with a piano before building in a way that is not as pop punk as where "Black Bird " goes . Lyrically they are darker on "Demon and Division". The formula so far seems to be. The start off the song with some interesting almost experimentation, since we are talking about the more straight forward genre of punk rock, then when we get to the first chorus, the anthemic pop punk stuff starts.

"Little Help?" starts of pop punk right out of the gate. For what this is they are good at it. I prefer they smoother way the vocals are handled on "I Can't Believe" and the palm muted tension of the guitar. This sounds like it could have come from the 90s, but that is fine with me as that is the time when this kinda thing was at it's creative peak. There is a slight hint of what we would later emo touching the melodies. There is a similar dynamic employed on "Sweet Vampires". Though this one is a little more upbeat. A friend of mine said he thought the Misfits started pop punk. On the song "Pale Blue Ribbon" I can hear that. "Goodbye Fire Island" makes me think they might be straight but not narrow. That's just the lyrics , the rest of the song is pretty decent.

"Stay" has a hint of country to it. After this I have to give additional listens when it all starts running together , the melodies on "Heart Attacks" seem to have a little more thought than your average pop punk. Not that these guys have ever really settled for being your average pop punk. "Worn so Thin" is more rushed and falls more neatly into what you might expect from pop punk. This faster pace is ramped up going into "Throw Me to the Lions". "Krystalline"  is an acoustic song that makes them break out from their comfortable formula. I'll give this album a 7.5 , since some of the pop punk predictability can wear thin, but even then these guys put more thought into what they do than the bulk of that genre.