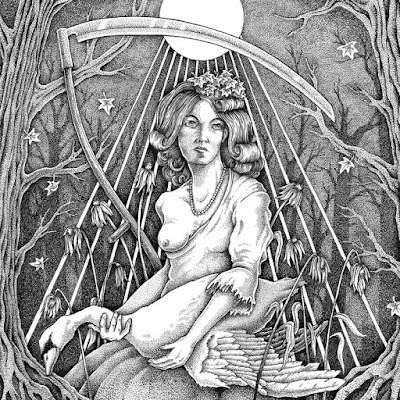 The album from this impressive one man project starts with a solemn piano piece that bursts into what we typically expect from black metal. The vocals are a nasty snarl brimming with agony. Midway into the song it shifts into more of a syncopated rock riff which is trades off against blast beating fury. Eventually it finds it's way into a more melancholy passage with almost sung vocals that come across more as a chant against the clean guitar. The song "Hostblod" starts with subtle synth and acoustic guitar , before gentle sung vocals float in.  When it build they are using restraint with the blast beats and urge to drown you in distortion. This pays off as I really like when harsh vocals are used over clean guitar.

They do not use this same restraint on "Tomheten" which aside from the passage of melody and the sung children's vocal that come in pretty much falls well within the lines of what black metal is now thought of as. The album closes with "Tystnaden" . It sounds like they are using a banjo or a  mandolin at the beginning. There is an ebb and flow to this song that reminds me of a darker version of Alcests earlier days, though I suppose the way the arrangement winds around Agalloch would be another fair comparison. While the blast beats that come in the song's third act are to be expected it does feel like they could have continued to break the molds they had avoided up to this point in the song.

I will go ahead and round this one up to a 8.5, though I doubt I will get a ton of mileage out of this album after this review is over. Not that I don't like what they are doing and appreciate the sense of melancholy they are bringing to a formula we have heard approached from different angles by bands I have already mentioned. If you are a fan of bands like Alcest and Agalloch, who don't put out much at all these days or have wildly changed their sound over the years, then this might soothe the ache their disappearance left in you.