Gothtober - Looking Back in Anger at Swan's "Filth" 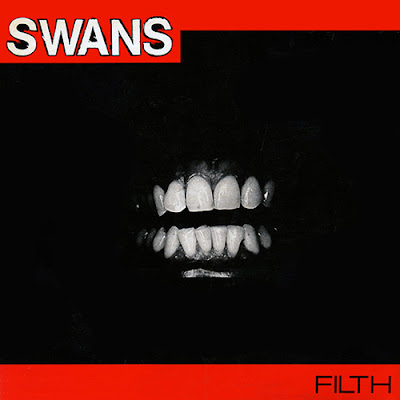 If you are a regular reader then you know Swans are one of my favorite bands. They evolved into something more akin to goth, but even at their every beginning they were still pretty dark. The 1983 debut of Swans in very influential . It set into motion industrial with bands like Godflesh owing a great deal to them.While though of as a classic, I am going to take a look and ask "Well is it actually any good ? How has it stood the test of time?" First off the opener sets the tone for the album as it  is dark and uncompromising. The drums pound out one hammering beat with guitars to get noisy behind it allowing the bass to hold the meat of the song together. Gira was chanting "flex your muscles" over and over. The next song "Big Strong Boss" is a more angular pound, with guitars in favor of more noise than melody. Even Gira's chanting seems a little less focused here. They allow the drums to slowly fade into "Black Out" . The guitars follow with a more subtle clang. The bass which has been controlling the songs with it/s thump takes more of a back seat. Gira' is ranting more. There is more of a rhyme and reason to what he is doing than the song before this.

Their is more of a tribal drum feel to "Power for Power". Every thing works really well and this is the best song yet there is a dark ambiance to it. The vocals make sense and it shows the path they will eventually go down. "Freak" is more of an interlude. "Right Wrong" is another song that works off an unhinged dissonance as it clangs at you. The vocal chant is repetitive and follows the march of the drums. I think this does sound like what they do it's just a crudely early version of it. This album is the neanderthal version of what they are going to evolve into. There is a thick distortion to "Thank You" . The drums are more syncopated and not as tribal. Gira takes on a more aggressive howl. "Weakling" is the song they have been most likely to play from this era in recent years and it works in with the newer jammy drone of what they did most recently.  Gira's vocals are more of a spoken rant. I like how the organized chaos of this song pulls itself together.


It's almost hard to call "Gang" a song so I have always thought of it as a weird outro as it's just drums and what sounds like drugged out chanting. So I'll give this album a 7.5, each album got progressively better as the band went along and started adding more melody. At the time when this came out it might have been ground breaking as Tom Waits had yet to really dip into the weird at this point leaving the likes of Captain Beefheart and Yoko Ono to toy with noise and challenge the listener in this way.