In the Woods : "Cease the Day" 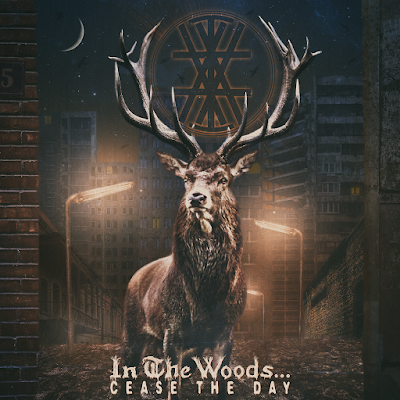 These guys are not the only black metal band from the early 90s that have changed their sound over the years.At the onset one might assume these guys have gone more of a Ulver route as baritone clean vocals have a mournful sound to them almost like a doomy gothy version of Pink Floyd. I do like the dark melodic tone this song has almost like something Katatonia might do. By the end of the song things have swelled back into metal. I also like how the effects drape the harsher vocals toward the end of the song, and while it is done in a more Enslaved like manner I do not feel the call and response between the clean and harsh vocals is predictable.  The second song works off  a more black metalish formula with a gloomier transition into the guitar solo. Then by the third song the band shows a more epic traditional metal sound. It has a sweeping gallop and majestic synths in the background.

"Cloud Seeder" is more mid paced. It doesn't stand out as much as the songs before. The clean vocals don't hook me in. The harsher vocals are more interesting here, which says a lot considering I prefer singing. It just begins to feel a little like a formula here. "Still Yearning" is more deliberate . The melodic breakdown at the three minute mark is a little weird but it does help to make the build back in more explosive. The more groove oriented chug the song finds it's self in is pretty bad ass. I don't think speeding it up makes it more aggressive it just sounds a little rushed. "Strike Up With the Dawn" has some effective grooves. The use of clean vocals does begin to sound a lot like Enslaved here.  "Transcending Yesterdays" follows a similar formula.

The last song is more of a ballad like outro than an actual song so for the sake of this review I am not going to factor it in when scoring this album. Very much in the same zip code of Norway as Enslaved. I really like this album because of what sets it apart from Enslaved, this is the fact that it's darker and moodier. Not dark enough for me to slap this month's Gothtober label on it , but dark enough to keep me happy. I'll round it up to a 9.5 , which should show you how far darkness goes in my book.
Posted by Wilcifer at 6:45 AM