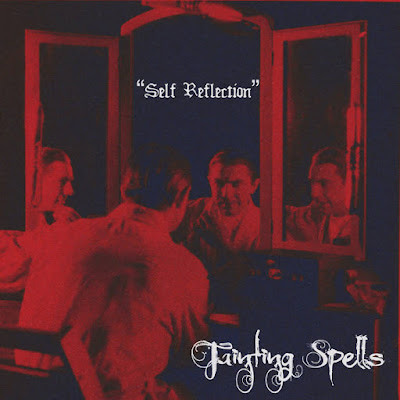 It makes sense the most legit death rock I have heard in sometime should come from LA since it was the needle infested gutters of that city that spawned. While Rozz Williams would have told you it's punk kids into Halloween, that's only half the truth. There was a seedy glam rock under ground that bands like Faster Pussycat came from where punks and glam rockers got their drugs it was from this dark melting pot of junkies that death rock came from. So what bands miss when they just commit to the punk side of the equation is the sleaze side of this equation . These guys capture that and managed to walk the fine line between paying homage to what Christian Death set in motion while having enough of their own sound. In this way death rock bands have a similar balancing act that doom bands must juggle with Black Sabbath.

"Choking" really finds them hitting all marks when it comes to the marriage of the dirtier rawer sides, with the first two songs getting lost in a similar darkness. I have to go back and re-listen to them, but the second song "Low" which feels almost like a transition within the first song, has more of a punk feel shuffle. The vocalist is not a Rozz Williams clone but uses a similar desperation in his delivery. "Weeping Willow" has a more melodic guitar part before going into a very similar sound to what they have already touched upon in the first two songs.These songs are all very short not breaking the three minute mark and the over driven sound that coats the album continues to dirty things up. Some of the nuances to the vocals kinda get lost in this.

"Manic" finds the guitar creating a static wall of slimey distortion.They get more more aggressive, with the vocals going into more of a feral scream. This is effective as it helps to carve out their own place with this. I'll round this down to a 9 as all of the songs carry a uniform sound. While I want to hear a full length from these guys, what they do works as an EP  with six more songs I would need more of a dynamic range from these guys . But they are great at what they do.