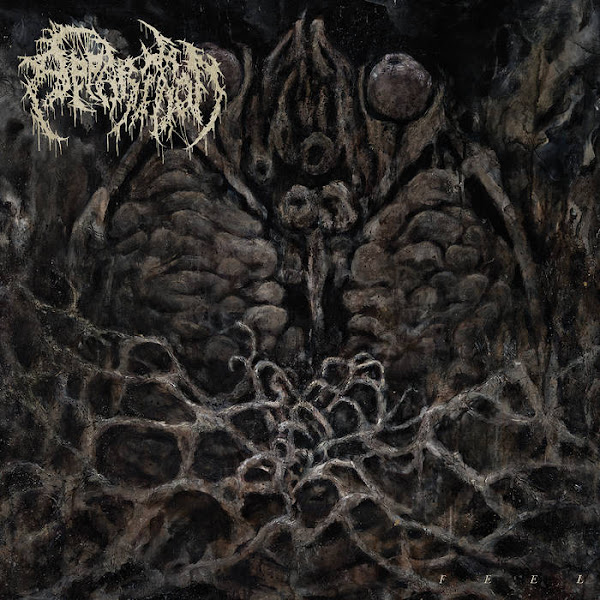 This album dropped last month from the California based death metal band who is clearly fixated on Incantation. They do slow things down and offer enough atmosphere to jump on the death doom bandwagon. Midway into the first song it is unclear if this is going to be done to the extent that will make me a happy camper. Death doom is not the worst trend in metal as it forces band to slow down and focus on things like melodies and create more of a mood. They have some hooky riffs but is this enough to be ranked in a magazine like Decibels top 10 albums of the year or are they just throwing in a less obvious pick for some cred? I guess we are going to find out here. They move at more of an Obituary speed for the second song. It kind of feels at this juncture which is only now a minute and a half into the second song that they are pretty much just a death metal band doing to minimum to meet the buzz word of death doom, though maybe this song just happened to be more straight forward. This is decent for what it is very dirty and dark sounding, but I am going to need to hear them do more than this or the novelty of just being really heavy is going to wear off.
"Nonlocality" is another straight forward double bass charge ahead that smooths into a groovier chug. Sometimes when I am making my end of the year lists , I have to sit down and split hairs with some sub genres to see where this would fall and while it might be death metal that is dark enough for people who like doom this is still death metal   Three and half minutes into this song is where they wait to take a turn into doom, so it is not even a fifty fifty split, but I do think it is important to review albums there might be some misconceptions about during a month dedicated to a genre to show what is and what is not well here doom.  "Perpetually Altered" stars off at a pace that makes this much clearer.  It also feels a little more mired into the aggressive monochromatic feel death metal can default to even with a couple of catchy chugs at hand.
"Entanglement" shows what they are capable of which is the best of many sonic shades. They open the song with creeping atmosphere with an undercurrent of jazz tinged drumming. Then go into a pretty catchy groove oriented death metal riff, with some rough edged blasting littering other corners. I am not opposed to that as lomg as their is something to provide dynamic contrast. The last song does lean more into the doom side of things, but does so in a less creative way than what these guys have show us capable of by just color by number Incantation worship. I will give this a 9 so it is a great album, but perhaps not one of the years greatest even when it comes to death metal, much less the genre as a whole.
This was released on Profound Lore Records.
4.6
Posted by Wilcifer at 1:18 PM