November is Doom- Looking Back in Anger at Cathedral's " Ethereal Mirror" 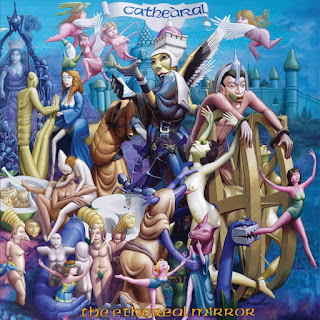 This column is where I listen back to albums that might have been of note at th time they were released and see how they hold up today, This is the album I remember spending the most time with when it  came out in 1993, I had their first album s well, but I recall listening to this one more. Lee Dorian from Napalm Death. His vocal style never really hits the mark in terms of singing and instead hold more in common with Tom Warrior, as it is a series of exclamations, granted when I was a teenager I needed for every one to able to sing like Rob Halford, so this did not quite cut the mustard. Now I can go back and appreciate this a little more since there have been decades of metal bands whose singer can not really sing either. The groove are very solid and this is an excellent record in terms of over all sound. The mix is right where every thing needs to be and the guitar were more capable then of being able to rip a mean solo than many of the band who grew up listening to this album. "Entering the Worms " being a notable song that has stood up well over the course of time.

There is more of a rock n roll vibe to "Midnight Mountain' which is an almost obnoxious in it's boogie down jamming. My favorite song on the album might be" Fountain of Innocence" as the effects on his voice help him with his singing to make it more melodic with the watery waver of chorus. The when things ebb down with the dynamic and the guitar is strummed there is an almost Beatles like part juxtaposed again a heavier snarl vocal punch  There is not shortage of groove on this album" Grim Luxuria" is another song to high light this fact. The exclamation of Dorian is rather over the top here. his voice accents things well, to imply where a chorus would be well enough. "Jaded Enity" works off more of the creeping doom vibes that were not at the same level of prominence when this album was released. There is a creepy part in the middle of the song that gives it more personality.

"the Ashes You Leave' has a stomp to it that makes me think of the song "Mississippi Queen" if run through the filter of many drugs. "Phantasmagoria" has one of the albums heaviest riffs, at time they go into a sludgey Pantera  like riff. They grind into a groove that would have opened up a pit or two back when this came out. Though as a whole the song stays at a mid pace.  I forgot this album ends with a short acoustic piece while it is a song it feels more like a an outro than than a song. I will give this album a 9, it is not a perfect classic, but a great album that I can see influenced other artists, though Celtic Frost did the same thing in many respects, this just had more groove fitting of when it came out,.