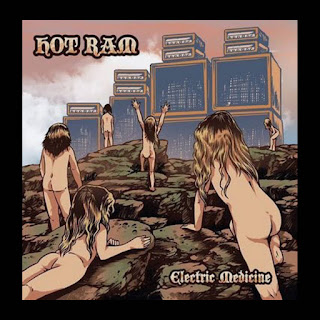 The stoner scene is Atlanta was big with the hipsters for minute then they moved onto what ever was next, These guys missed that wave but are confident and doing their own thing. The vocals are set back into the guitars when the are sung and come up in the mix when more barked. This works of a familiar loud to soft dynamic from the 90s. They are not too stoned to keep things moving as rather than the typical lumber they come at a pretty brisk pace. The second song is like if "Into the Void " was given a more thrash driven groove. Is there some Mastodon influence? Yes, is that a coincidence given where they are from ? Ummmm, it still works as a song.

The chugs are beginning to take on a more uniform sound so while I am going to need more from them moving forward from this point this still works for what they are doing the vocals once again sit back and cost on  lower almost whispered vocal to more of a throaty bellow.  At the two and a half minute mark they switch it up and go into more of a jammy boogie.  They try to cover Judas Priest's "Riding on the Wind".. For a group whos a three piece that does not place great emphasis on vocals they are at a disadvantage here, granted they can always layer guitar in studio to try to replicate the twin guitar attack of Priest , but why try to sing something Rob Halford penned unless you can get up in your head register? I would have preferred another original song.

"the Grave of the Arch Stanton" has more of a Clutch feel to it, in terms of winding bouncing groove and the way the vocals are handled. It does step away from the more chugged riffage the front end of the album was heavy on so I will give them that.  The beginning of "Binary Sunset" is a dramatic departure from what we have gotten from them earlier in the album and is the kind of dynamic shift I wanted to hear if they were capable of. From a song writing perspective  it kind of wanders off in the distant and some of the fat could have been trimmed as it drones for four minutes past where it should have gone. I will give this album an 8.5, it is not perfect, but puts this fledgling band ahead of the other unknowns fighting in the Atlanta underground metal scene and allows them to do better than just hold their own in the stoner metal scene, if you are into more aggressive and metallic stoner metal then this is one of the year's better albums.