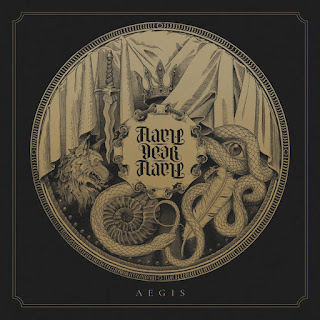 This German band is often doom mood wise, but there guitars are way backed off on the verses and female vocals rather bright and soulful though not to the point of being happy. They have a very bare bones organic tone , like not much else is being done but sonic separation and everything is just what is coming from their amps. In some ways it reminds me a little of the Gathering.  Even more so on the more atmospheric moments of the second song that is even more stripped down. Way more soulful than what you might expect German metal to sound like. In certain phrases her voice is too clean , this leads to her sounds like someone from an anime soundtracks in my mind at least or one of the more operatic symphonic metal bands,. which the Gathering was certainly a few steps ahead of in time
The third song is dynamic , but it is also ponderous and could have stood to be reined in and a little more hooky, the vocals wander rather than punch. While this is common in this sort of thing that does not mean it is always the most effective path to take. The way the album is set up, there are multiple parts two songs. The second "the Wolf and the Prioress" starts off kinda like a power ballad. Her vocals are very stripped down and up front in the mix and could stand perhaps effects or layers so they hold more weight when things get heavy.  While they do a decent job of avoiding the obvious metal clichés, it is interesting the metallic elements they do employ, mainly during the jammy section that the guitar solo. The guitar solo itself being one of them. The 3rd part of the wolf song is more folk oriented. It leads them off on another wandering path even when they lock back in with the strum of guitars.
The last song is the album's most metal moment. I say that like I am requiring them to met a certain standard of metal when I am not. I just want good songs. The guitar gets more aggressive. In a thrashing chug and not in the dark doomy manner . It does bob and weave around you as it progresses.. The more i listen to it th more it grows on me which could also be said of the album as a whole. I will give this one an 8.5 as it could have been more refined in terms of making more of some of the melodies but over all it was a lot of fan and created a great mood.
Posted by Wilcifer at 7:55 PM