November is Doom - All Hail the Yeti : "Within the Hollow Earth" 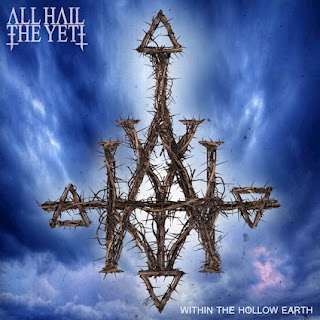 When you think of stoner metal, normally what comes to mind is a somewhat retro affair with an organic  70s vibe that recall the early days of metal. It is funny how production can color a genre and take one riff produce it four different ways and you are getting four different sub-genres. While some grunge and sludge from the 90-s might come to mind they are cranking up a much more modern sound that owes more to the post - Cowboys From Hell Pantera in terms of groove and aggression with a side of  blues entrenched grit that Corrison of Conformity cranked up. COC at one point early in their careers actually being a punk band and Pantera being influenced by hard core on "Vulgar Display of Power"  where these guys feel more influenced by the metal core of the Myspace days. There is a tinge of Alice in Chains , who is a band that was known for being into things harder than bong worship. While Black Sabbath is the influence all those bands can trace themselves back to Black Label Society seems like a better reference point for these guys.

They are very consistent when it comes to delivering a good vocal hook at the chorus, though a great deal of glue sniffing almost nu metal posturing as they stomp through the verses. "Nidavelir" works off the formula that has been in play thus far , though the riffs might give the vocals more breathing room and have more of a hook to them that recalls Mastodon, which is surprising that one band who pays homage to a mighty beast of yester year might share some sound with another band who also shares their name with a mighty beast of yesteryear. No one is going to say this is the most original band, some might complain that I referenced too many other artists while talking about these guys, but if the pieces of the puzzle were more original then that would not be a thing would it.  "Cold Dead Leaves " might as well have Brann singing the chorus. The hard core shout that fall once more on the verses find the formula becoming less thoughtful even though some of the hooks still keep my interest. The leather throated hard core shouting just plays against them and makes them feel a little dated .

They continue to coast down the post-Jurassic grooves for the ever predictable " Cry of the Waheela". This could be any band from the late 90s. Mixed of course with you know who. To their credit the formula holds up until the last song then the tedium really burdens my ears . This is well done in terms of the sounds they have built this with, there are some fine songs , it is just not the most original thing so I will round this down to an 8. If you are into more mainstream groove oriented stuff then it might be your thing do not believe claims it is sludge having anything in common with likes of Eyehategod. The fact it is southern metal from Los Angeles says it all.

Email ThisBlogThis!Share to TwitterShare to FacebookShare to Pinterest
Labels: 8, all hail the yeti, stoner metal