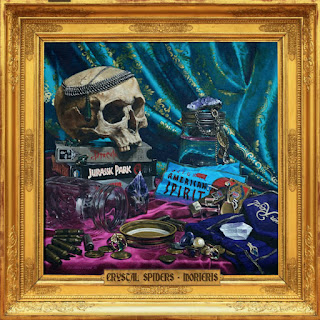 Corrosion of Conformity guitarist Mike Dean is back with his stony doom band. Female vocals that float round the building storm of the title track that opens the album makes it clear once again why the comparisons to Dean's other band should end with the guitar tone. This is darker , but not especially  heavy until it locks into the Sabbath rumble of the second song. Her voice keeps them from becoming a Sabbath tribute band . You know if I had reviewed this album back when it came out  at the beginning of October I might have been more impressed, but almost midway into a moth based around doom, I am hearing what every one else is doing and there is less of a space for them to carve out a district place for themselves. Are they doing this better than most of the bands I have clicked on searching for things to review, yes.

"Harness" just kind of blared with a banging rock right past me and while it served as good background music never pulled me in. The guitar back off in the mix for "Offering" and allow for the vocals to become the centerpiece again. This is a pretty straight forward rocker, up tempo rock and not brooding doom, a little more punk influenced perhaps. They step on the gas even more for the more grunge fueled " Pandora" . Not the album's most focused songwriting, but not bad either.  A just over eight minutes "En Medias Res" is the album's longest song. The previous one being just over two, so they are normally pretty compact and do not try to get by off droning you into submission. This song however builds off one pulse, i am sure live it might make for a fun jam, here it builds in layers but lulls your attention away rather than within

"Maelstrom" starts off more straight forward then simmers off into a slower doom jam. If you are into guitar solos there are some here and through out the album that are well done. The last song simmers around the same stoner blues throb, to their credit it is more of a vibe than a Black Sabbath tribute as they work out the sonics. I will give this album an 8, the production is a little off as the drum could use more balls , but over all they accomplished what they set out to do so this deserves and 8 as there are solid songs and sounds.