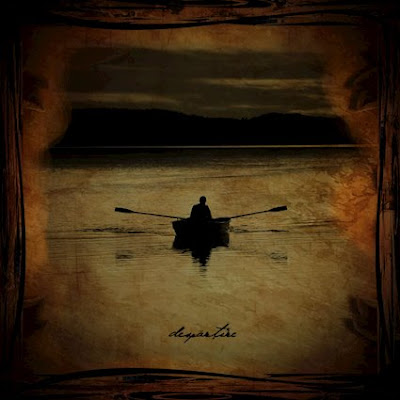 This is a band I have always liked when I listened to them but never really invested in hard listens of their albums. This album helps me to further see the error of my ways.  There is a beautiful mix of atmosphere and melody off set by the low growled vocals which are really the only heavy or dark element of the otherwise soaring opening track. If asked is this a doom song , I would tell you it is heavily influenced by it thus retaining many of the emotional elements of the genre. "Mick Moss from Antimatter contributed vocals to the second song. Which is more spacious in it's longing. I am not sure it is darker , but feels woefully expansive. Despite being from Romania, I hear little evidence that any of the members are vampires though the strings in the back ground could appeal to a vampire.

They sail on the same sad waters for "Your Name in My Flesh" the guitars are not prominent in the mix, which I am fine with as it allows the vocals to flourish . If I was invested in this band being heavy then I might have more concern in this regard. But I am fine with things as they are even if they are beginning to become a little uniform in their  romantic approach to atmosphere. Aaron from My Dying Bride shows up for "In Both Our Worlds , the Pain is Real" . He has one of the coolest voice in all of metal not just doom. This song kind of coasts along and does not ask him to do more than any other of the previous songs. There is some dynamic ebb and flow . but nothing remarkable, in fact I could do without the spoken word parts. There is a really impactful guitar solo toward the end of the song.

The first metal heavy moment comes when "the Door We Never Opened " finally brings the weighty crunch down. I think this is even more effect when you consider the end of the spectrum the song opens with being mainly piano and vocals. The clean vocals on this album are all really well done, I think Aaron's appearance might have been the most conventional for this sort of thing and they even out emote him. The double bass of this song , helps to give the drive the heavier leaning of the other songs never made it to. The distorted chords lingering open up "A Place For All Your Tear" giving  it a more doom feel along with the low gurgle of death metal vocals. There are also melodic vocals though less  frequent then the other songs. They make up for this with the ballad "See the Sky With Blind Eyes" which might as well be a very depressed version of Dream Theater. Overall this album is excellent and creates an enjoyable mood despite perhaps not being all that dark so I will give it a 9. This album drops on December 3rd.